Once upon a time, when I was a girl, I was far more interested in frogs than in fairy tales.

I wasn’t all that enchanted by the Disney princesses of my 1960s childhood, either — Snow White, Cinderella, Sleeping Beauty. Maybe that’s because I was born middle class, not upper crust. That was part of it, no doubt, but I had different dreams. I wanted to become a writer, an artist, and a scientist. I was looking for a life that offered something more intellectually challenging than deciding which gown I should wear to the ball… not that I was keen on attending such an event in the first place. After all, glass slippers are useless on a hiking trail, and where was the adventure in finding and marrying some privileged slacker bro who would expect his spouse to hang around the castle all day? Boooring!

Disney’s second generation princesses of the 1990s — Ariel, Belle, Jasmine, Pocahontas, Mulan — wore more sensible shoes as they took steps toward a more empowered life. By then , however, I was already an adult, and the role models I looked to were more substantial than drawings on celluloid or pixels on a computer screen.

It wasn’t until Pixar brought brave Mèrida to life that my interest in allegorical heroines was reanimated.

So, as you might imagine, I was caught completely off-guard when, strolling through the shire one evening, a dashing young prince in the guise of a Blanchard’s cricket frog (Acris blanchardi) bounced out of the shadows and onto the path before me, demanding a kiss. 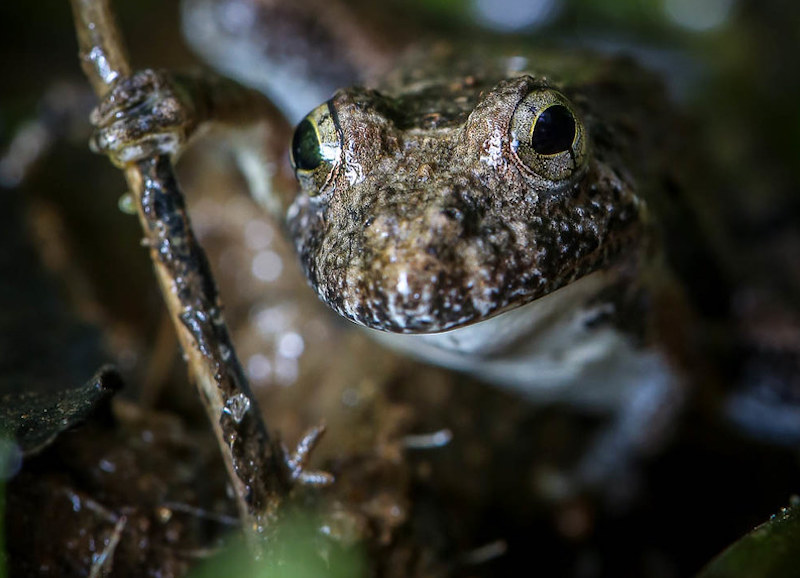 In every way but one he was a character straight out of Central Casting, warts and all. In the dim light of dusk it was difficult to tell whether his pebbly complexion was brown, grey, or olive green, possibly some combination of all three. There was no mistaking that confident swagger, though. He was dark and handsome, and boy did he know it.

But he was definitely not tall. Bathed in moonlight, my half-inch high (1.6 cm) prince inflated his throat and launched into an aria with a voice as big as ever after. 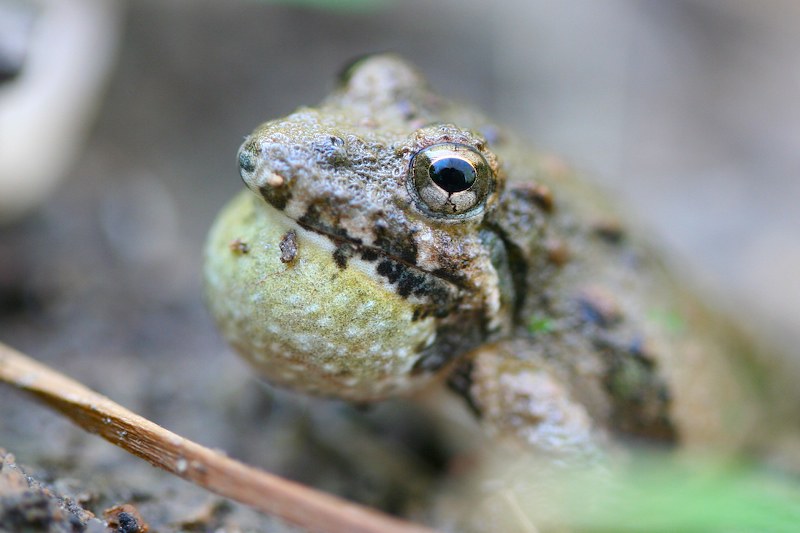 How to describe that serenade? He wasn’t Pavarotti, that’s for sure. Not Frank Sinatra, or Julio Iglesias, or Barry White. None of those crooners have percussive voices reminiscent of stones bumping against one another to create a spark. The closest match I can think of would be Louis Armstrong’s wonderful gravelly baritone (even though my troubadour was a tenor).

This fellow standing steadfast on the sidewalk, blocking my way, had recently left home and set out on a quest to find true love. Although, truth be told, his kind are the most aquatic of the North American treefrogs, as well as one of the least arboreal, so he probably spends more time in the moat than inside the manor. Cricket frogs like to hang out at all the local water holes — bogs, seeps, swales, streams, as well as the decorative ponds, reflection pools, and other water features found in urban hamlets.

Given how much of his time is spent in and around water, I suggested a mermaid would likely make a better match than a decidedly terrestrial creature such as myself. But, as he explained, with a maximum expected lifespan of one year he can’t afford to be picky (great way to make a girl feel special, dude).

The clock started ticking last summer. His Queen Mother dropped her kids-to-be off at the pool and split. (Now, I realize the aristocracy are known for taking a hands-off approach to child-rearing but don’t they usually hire someone else to do the job?) Without a nanny, the youngsters were left to fend for themselves from day one. In the eat-or-be-eaten world of palace and pond they were vulnerable to predation by dragonfly larvae, fish, and even their bullfrog cousins.

Obviously, Mr. Charming was either very clever or at least lucky, because he’d made it through all the required rites of passage to adulthood — from egg to tadpole, tadpole to froglet, and then froglet to frog — over the brief span of two or three months.

Sometime in October, my swain explained, he moved underground and fell into a deep, trance-like slumber. Not because he’d eaten a poisoned apple — he’s an insectivorous carnivore who has never been fond of fruits and veggies. It’s just a tradition in his family to hibernate when Jack Frost hits town, and then wake from a long winter’s nap in late March or early April.

Now, on this midsummer’s eve, it was time to sire the next generation and perpetuate his lineage. The first step was to meet a suitable mate… and to do that he had to figure out who he was. A peck on the head from me, I was told, would break the spell, if one had been cast, and the tiny cricket frog before me would complete his final metamorphosis, transforming into a prince before my very eyes.

Or, he would remain unchanged… and shift his focus to a different dating pool.

It’s just a kiss, I thought. What’s the harm? So I let him climb aboard my hand, raised my palm to my face, and leaned in to deliver the magic smooch.

But then I thought…

NOT SO FAST, BUSTER!

When Fiona kissed Shrek, he didn’t turn into a prince. She turned into an ogress!

Nothing against Fiona but I don’t want to be an ogress!

Sure, I like frogs, but I don’t want to become one.

I don’t want to be a princess either…

although I wouldn’t mind being a monarch.

I do enjoy being in charge.

I’m not even looking for a prince. I’m a feminist, for Pete’s sake.

Plus, I already have a sweetheart!

I tried to let him down easy. Literally.

As I placed him gently in the grass near a puddle, I explained that it isn’t in my nature to kiss cricket frogs or live in castles… not to mention, my maiden days were long, long ago. Flattered as I was by his offer, I had to be true to myself and respectfully decline.

At first he didn’t seem to hear me, although the look on his face was startled disbelief. Maybe in all this young buck’s charmed life he’d never encountered the word “no.” He just kept singing, louder and more insistently, almost as if he was trying to drown out my words. I started to wonder if he might be neither frog nor prince, but wizard. A shape-shifter trying to beguile me with some kind of amphibian abracadabra!!

I guess I’ll never know because at that moment bid him farewell, turned on my heels, and wished him good luck over my shoulder.

Of this I’m certain, though — somewhere in DunBroch, Mèrida knew the choice I’d made, and smiled.

© 2021 Next-Door Nature. Reprints welcomed with written permission from the author. Thanks to the following photographers who made their work available by granting permission for use on this blog: cassi saari, Dave Huth, denny henke, rkostecke, Kory G. Roberts, belen bilgic schneider, and Bob Ferguson.