Lately, when I’m feeling especially stressed or anxious, I find it comforting to escape reality by watching a sitcom episode, or three, from “the before-times,” a term now being use as shorthand for “everything prior to the first quarter of 2020, when the world changed for everyone, everywhere.”

Little wonder I’ve considered, in odd moments, what the Friends gang would be doing if a COVID-19 lock-down kept them from meeting at Central Perk or hanging out at Monica’s place. Would Joey raid the girls’ fridge by calling on the phone and asking them to toss a sandwich across the hall? Would Ross get distracted while teaching on Zoom every time he looked out the window and saw Rachel in her apartment on the other side of the street? What would Chandler have to say about all of this and could it BE any more sarcastic?

Given my life-long interest in wildlife, it shouldn’t be surprising that I’ve also pondered whether Phoebe has anything in common with her avian namesake, and how that might influence her response to a global pandemic.

I have to say, at first glance they do not appear to be kindred spirits.

For one thing, NYC Phoebe spends a lot of time in the company of others: she’s had a number of roommates including (at different points in time) Monica, her grandmother, and Rachel; she seems to know everyone in Greenwich Village; she’s a massage therapist, a job that is more than a little difficult to do remotely; and when she’s not working she always seems to be hanging out on someone’s couch.

Eastern phoebes (Sayornis phoebe), on the other hand, are natural social distancers who don’t usually buddy up with other birds, even members of their own species. They mostly live alone and are more Type-A than Phoebe, with plenty of things to do, places to be, and no time to fraternize.

During the show’s 10 year run, Phoebe dated at least 31 different guys, whereas the phoebes limit themselves to one affair per year. Spring is a brief social period in an otherwise decidedly solitary singles life.  Early in the new relationship a paired male and female may hang out during the day and even spend the night roosting together.  Then he’ll watch as she builds a nursery on a tree bough or below the eaves of a building… or she might re-purpose the abandoned nest of an American robin or barn swallow (you know, the way Phoebe once lived for a while in a burned-out Buick LeSabre).

Into this cozy cradle the she-phoebe places two to six phoebes-to-be, each swaddled in a speckled protective shell reminiscent of the cinnamon-dusted foam on Phoebe’s freshly steamed latte. 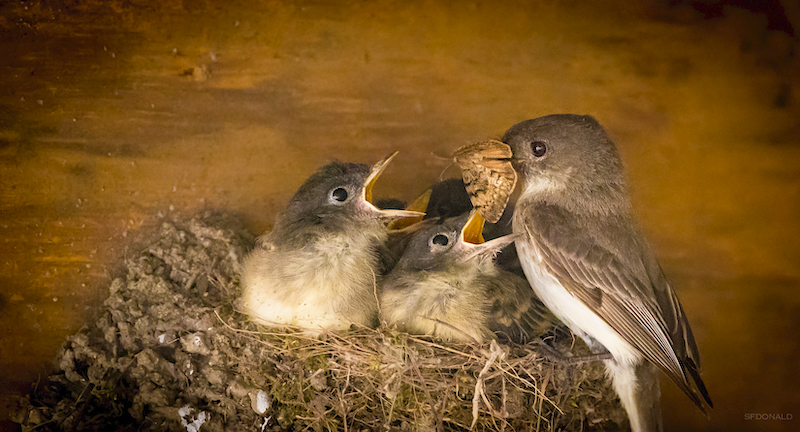 Once the offspring hatch, Mom and Dad co-parent the chicks but aren’t all that involved with each other’s lives. . Scratch that. Actually, they are ships passing in the day because even though Phoebe lives in the city that never sleeps, phoebes aren’t active at all after dark.

Speaking of reproduction, here’s an interesting synchronicity — nesting phoebes sometimes find themselves acting as foster parents for a brown-headed cowbird chick (Molothrus ater) along with their biological brood (because that’s just how cowbird moms roll)… kind of like the one where Phoebe agrees to be a surrogate for her half-brother and his wife!

Well, not exactly like that because: 1) phoebes and cowbirds aren’t as closely related as Phoebe and Frank, Jr.; and b) Phoebe gave birth to the triplets then handed them over to Frank, Jr. and Alice to raise but cowbirds don’t come back for their children once a phoebe finishes incubating them.

Ooooh-ooooh! Remember the one where Phoebe and Mike raise a litter of orphaned rat babies? It’s like that!!

I guess when it comes to parenting, the only thing we can say for sure is that, when asked, both Phoebe and phoebes are willing and able to take care of someone else’s kid(s).

Ok, but here’s something the Pheebs share for reals — they are musical AND neither are conventionally Pop Top 40.  Both are vocalist and, to my ears, there’s something about the phoebes’ raspy fee-bee song that sounds similar to Phoebe’s in the one where catching a cold made her singing voice husky.

Of course, Phoebe also plays the guitar but phoebes are limited to perching on the fret board, and they don’t even have enough toe strength to help out with chords.

I just remembered only male phoebes sing so I don’t know if this example should count.

One thing’s for sure, no one would mistake these songbirds for identical twins.

To clarify, Phoebe has an identical twin named Ursula, that’s true, but not what I meant. What I was trying to say is that Phoebe is 5 feet 8 inches tall and phoebes are somewhere between 5½ and 6½ inches from beak to tail (in other words, way shorter). Furthermore, the two do not share a signature style. Phoebe’s closet is a fashion kaleidoscope of artsy colors and patterns whilst phoebes are extravagantly monochrome.

However, it should be noted that both Phoebe and phoebes will vary their coiffure. Hair is a naturally more mutable canvas and Phoebe obviously likes to play with (and sometimes chew on) her blonde tresses, but a little extra effort and attitude can give even a phoebe’s modest cap of feathers mad volume!

Speaking of hair and feathers, let’s put a bow on this compare and contrast distraction, shall we?  I think it’s safe to say that Phoebe and phoebes probably aren’t going to become close Friends but I think they could have an enjoyable convo over coffee now and again.

Just as long as they avoid one controversial topic.

Remember the one where Phoebe hates PBS? Well, phoebes are a big fan of public television, especially the David Attenborough nature specials like The Life of Birds, so THAT could be awkward.

On the other hand, Phoebe’s beef is with Sesame Street in particular, and phoebes are definitely not a Big Bird.