If the stranger hoped to slip into Lafayette Square unnoticed he went about it all wrong.

Sure, choosing a plain white top beneath an unadorned black waistcoat might sound like a reasonable way to avoid detection, especially when one is hanging out against a backdrop of grey-scale bark and shadow. I could tell at a glance this newcomer was more whimsical than wallflower, though, because it takes a sense of fashion humor to wear a crimson balaclava in Arch City in mid-May. The newcomer was about as inconspicuous as a fire truck on a putting green.

I saw that traffic-light red head and made a positive ID PDQ. You see, many feather-clad wild things are christened with fanciful, evocative titles but there are some who get tagged with undeniably unimaginative, blatantly literal names. It doesn’t get any more unvarnished or descriptive than Red-headed Woodpecker (Melanerpes erythrocephalus). Even the species epithet derives from the Ancient Greek words erythros (red) and kephalē (head).

That’s why, as I passed under the leafy Lafayette Park canopy on a sunny Sunday afternoon in May, my flash of recognition was immediate even though I was not expecting to see him in the neighborhood.

Or her.  Red-headeds aren’t gender-fluid but their fashion statement is assuredly androgynous so I’m not sure whether he was a she or she was a he. Doesn’t matter.

I see Red-Headed relatives on the regular when I’m out for a stroll. The extended Picidae family are an

industrious lot, usually far too busy with home maintenance, grocery shopping, and child-rearing chores to stop and chat. Even so, I always take a moment to nod hello to the Downys (Dryobates pubescens), the Hairys (D. villosus), the Flickers (Colaptes spp.), and the Sapsuckers (Sphyrapicus spp.) when I see them out and about.

I’m especially fond of the oh-so-emo, vermilion fauxhawked Red-bellied squad (M. carolinus). People mistake them for Red-heads all the time (which is, like, SO tedious [dramatic sigh]. Why does no one take the time to really see you, for YOU, you know?).

Fans of classic cartoons might assume, based on a certain zany avian character, that these flamboyant featherweights are show-offs, wiseacres, class clowns. Not so!  Woody may have a red head but he’s no Red-Headed. (He claims to be a woodpecker but that turned-up duck bill he wears is as convincing as a cheap toupee!)  The bird I saw is no two-dimensional slapstick entertainer.

Now, I’m not suggesting they can’t perform. Red-Headeds may not be as gymnastic as some of the smaller woodpeckers but they can definitely bust some impressive moves, and they don’t need trees to serve as apparatus. RHWs are athletic, acrobatic flyers, and when it comes to snagging a midge or mayfly or moth out of thin air they have definitely got game. All consummate professional, though. No showboating. 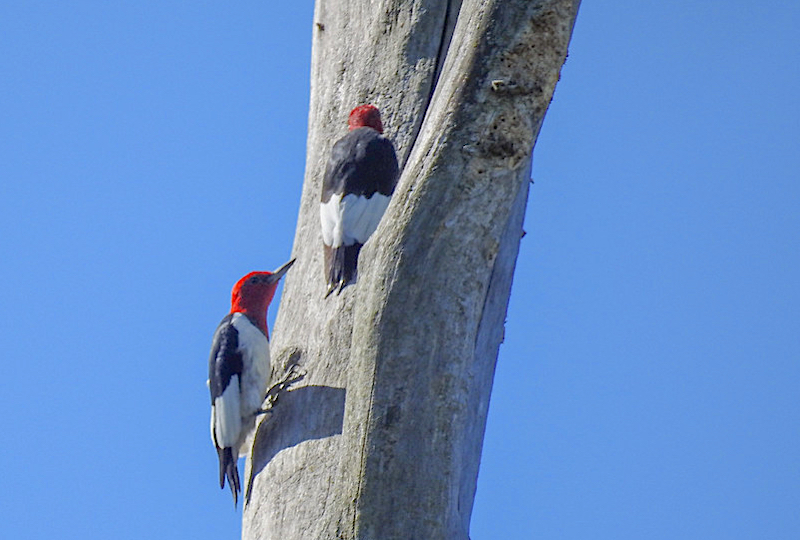 The stranger I spotted was solitary but s/he is not a loner by nature. Red-Headeds take their commitment to a life-partner seriously but they also know how to have fun. Early courtship tends to include playing hide-and-seek and chase, with the interested parties pursuing one another around the circumference of a snag or telephone pole.

Furthermore, while at first glance Red-Headeds appear to be mild-mannered, real life isn’t all fun and games. Beneath those flaming manes you’ll find fiercely protective parents who’ll defend nest, nestlings, and territory against all comers, including snakes, raccoons, and gray foxes. RHWs are known to go on offense, picking fights with other avian species, including their woodpecker kin. 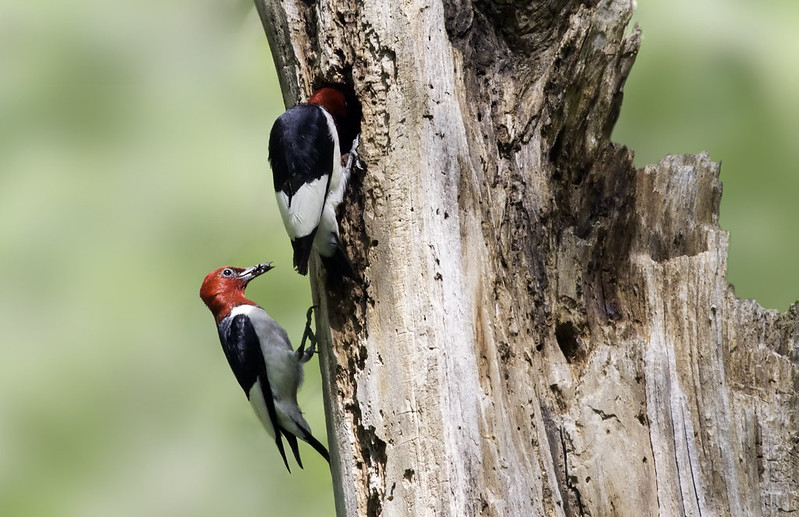 Thirty seconds after I spotted that splash of scarlet, maybe less, the bird flew west towards the other side of the park, searching for other timbered accommodations, perhaps. Maybe scouting for a skirmish.

As I continued my  clock-wise route I found myself hoping this Red-Headed stranger sticks around long enough to become a neighbor. A couple of times, while hiking, I’ve heard Red-Headed couples telling each other jokes so maybe we could share a few laughs.

On the other hand, they never seemed to get past “knock-knock.”