THRILL to the sight of daring aerial capers!

Come one, come ALL!

The Flying Circus is winging its way to a backyard near YOU!! 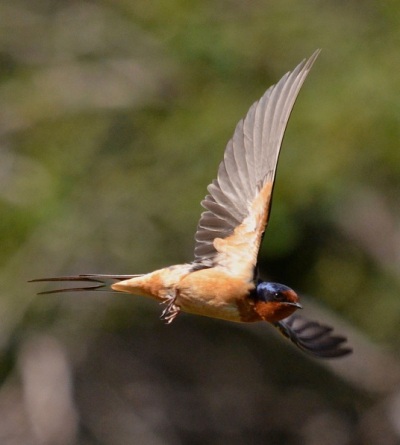 Critics are raving about this summer’s must-see event. Word to the wise, though—in addition to a lawn chair you’ll definitely want to bring some binoculars. That’s because the stars of this air show have an average wingspan of about 12 inches (30 cm). We’re not talking F/A-18 Hornets here, or even a Cessna 152. Think sparrow-sized, not Sparrowhawk.

Barn swallows (Hirundo rustica) epitomize the principle of “form follows function.” Combine a slender fuselage with long, tapered wings and a deeply forked stabilizer (aka “tail”) and you’ve got a bird made to spend the majority of waking life with wheels up. They even wear a uniform appropriate for fly-boys (and girls)—glossy chrome blue above and buff-to-rust below; similar to the colors of a U.S. Air Force Blue Angels jet.

Barn swallows are found far beyond U.S. borders, though.  You might even go so far as to call them jet setters. Six officially recognized subspecies are found in North and South America, Europe, Africa, and Asia. Generally speaking, the species breeds in the Northern Hemisphere (as far north as the Arctic Circle) and takes winter R&R in the Southern Hemisphere. Ornithologists have recorded barn swallows traveling over 7,000 miles (11,000 km) from Europe to southern Africa, and those based in the Americas cover similar distances.

Whether cruising inches above land or water or performing barrel rolls, loop-the-loops, spins, and stalls in mid-air, these agile flyers are crowd-pleasers. They aren’t grandstanding, though. A barn swallow’s life consists of more than playing with the physics of flight. Like the post-WWI stunt pilots of the 1920s, they’re trying to make a living.

It takes fuel to fly and the barn swallow go-juice of choice is winged insects—primarily high-octane flies, but also beetles, bees and wasps,

moths and butterflies, ants and termites.  Eating on the fly really comes in handy during long missions, including migration. Quenching one’s thirst, bathing, dating, and defending the home territory—they’re all done on the wing.

Historians disagree as to the origin of the term “barnstorming,” but one popular explanation is that pilots would fly through an open barn door and out the other side (they hoped) as a demonstration of their prowess and to drum up joy ride business.  Barn swallows have been known to fly in and out of barns as well—hence the common name. It’s a lot less risky for the birds, though.

Even daredevils like to have a place to call home, a chance to raise a family.  Before permanent man-made structures became commonplace, barn swallows built nests in caves or on the face of cliffs. Long tolerated by humans for reasons  both practical and aesthetic, today only one North American population holds to this tradition, in the Channel Islands off the coast of California; the rest of the fleet hangar in the rafters of open buildings or beneath porches. Bridges, especially those that span water, are particularly popular due to their proximity to crucial building materials. 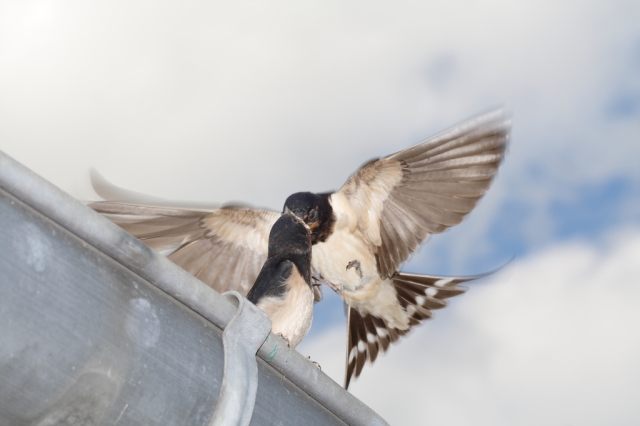 Gathering mud by the bill-full, mated pairs make countless supply runs to construct a neat cup or half-cup, depending on the location, then line it with grass, feathers, hair from the livestock living under the same roof, and any other soft, insulating materials they can find.

Once there’s a home base in the crosshairs, the bombardier gets the go-ahead to drop her payload of 3-7 eggs. The pair begin a series of aerial fueling attempts and in about a month’s time they’ve got themself a squadron of next-gen aviators.

Time to put on a show!