We can argue until the chickens come home to roost about which 19th century influencer said it first, industrialist Andrew Carnegie or author and humorist Mark Twain, but there’s little dispute that most birds wholeheartedly agree with the statement, “Put all your eggs in one basked, and then watch that basket!”

Most, but not all. The brown-headed cowbird (Molothrus ater) is an exception that proves the rule.

Small in comparison to other members of the blackbird family, a casual observer could easily mistake this sturdy bird for a finch, especially the females and juveniles with their plain Jane plumage and conical seed-eater bill. Up close and personal on the sunny side of the street, an adult male BHC is an easy ID — he’s no peacock but there’s understated color to this character dressed in distinctive satin-finished bronze and prismatic ebony. When viewed from afar or when foliage is throwing shade, however, that eponymous metallurgic head fades to black and this fella’s identity becomes harder to pin down.

Don’t judge these books by their subdued covers, though. When it comes to the birds and the bees, these unconventional avians aren’t reading from the same playbook as other feathered folk.

Not that other birds all march to the tune of the same drummer when it comes to reproduction. Far from it! While general intraspecies conformity is the norm, there are many ways to be a family and finding diversity in the bird world is child’s play. For example, there are:

These varied procreation tactics do have two things in common. First, the care-givers are related to at least some of the care-receivers. Second, BHCs don’t use any of them.

Well, “hire” is stretching the truth. The technical term for this is brood parasitism, a loaded designation if every I heard one. BHCs form monogamous pair bonds and breed but they don’t build their own nests and they don’t raise their own kids. Rather, the female cowbird searches for the unattended cup-shaped cribs of small passerine birds and then, without even asking first, she’ll “gift” the homeowners with one of her eggs to incubate and raise as their own. The foster parents are non-consensual nursemaids, sometimes working to the detriment of their own offspring since cowbird chicks are often larger, grow faster, and out-compete their nest-mates. 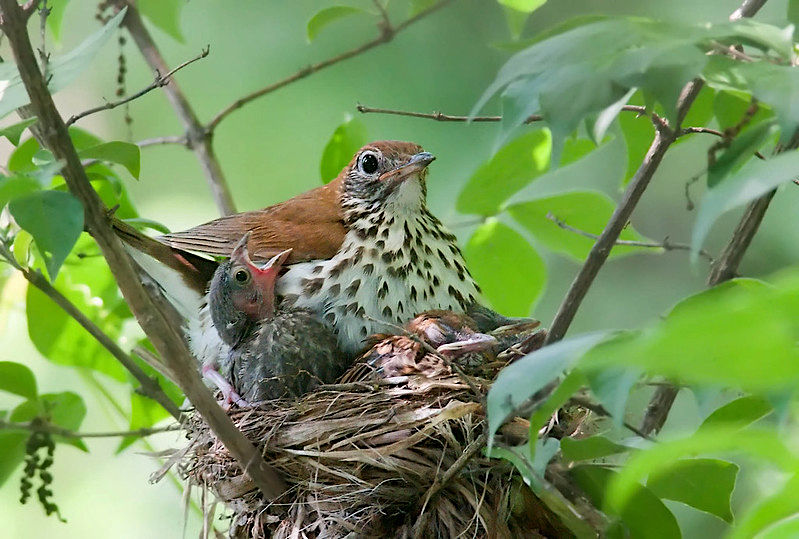 At first glance, handing over responsibility for your genetic posterity to a complete stranger sounds mighty risky. After all, procreation is a costly endeavor and, as with any sizable expenditure of time, effort, and resources, it only makes sense to watch that investment like a hawk.

Data suggest brood parasitism is a wise sweat equity choice, at least for some species. With an estimated global breeding population of 120 million (Partners in Flight) there certainly isn’t any shortage of BHCs.  That’s a bit surprising because, earlier in their history, cowbirds were strictly a Great Plains species. Their nomadic habit of following migrating bison may have played some role in their abandonment of traditional home ownership and parenting duties. As North American forests were cleared for agriculture during the 1800s, the resourceful cowbird moved in alongside white settlers, expanding their range, habitat, and the number of potential au pairs. 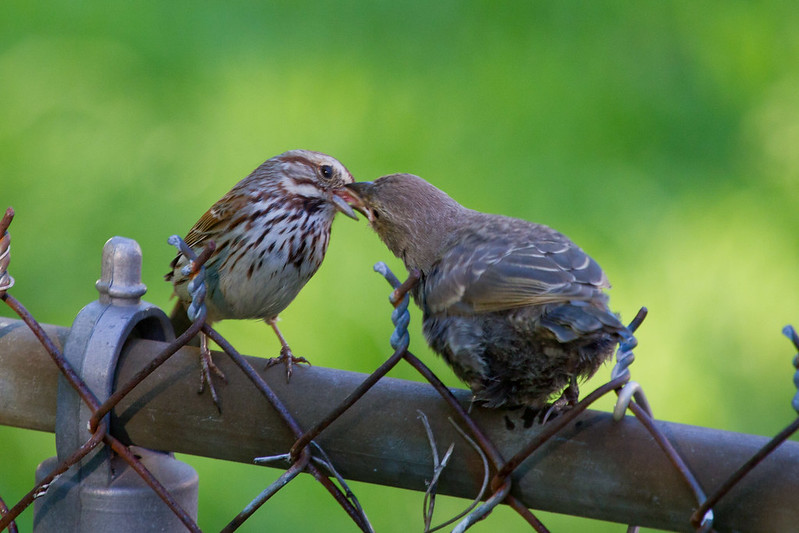 Don’t assume BHC females are feckless and self-centered, abandoning their babies to make time for shopping and lunch dates. By outsourcing stay-at-home chick-rearing chores a matriarch can focus all of her metabolic efforts on increasing progeny. Incredible but true, egg production by cowbird girls may exceed 6 times the average outlay of other songbirds. The result is greater strength in numbers for Team BHC.

Moreover, when a BHC mom places her eggs in a multitude of baskets, to be raised by birds with a smorgasbord of dietary preferences and behavioral propensities, she improves her progeny’s survival odds without jeopardizing their emotional well-being and sense of self-worth. All while allocating plenty of time for eating well, resting, socializing, and other restorative self-care tasks.

You know, maybe basket-watching isn’t all it’s cracked up to be.