Do you remember being 15 years old and walking out the door of your local DMV with a learner’s permit in your sweaty hand?

Perched on the edge of your family-of-origin nest with wings outstretched, ready to fly into the unfettered sky of adulthood and freedoms you’d dreamed of for a lifetime!

Do you also remember falling back to Earth with a THUD when you slid behind the wheel for the first time?

Strapped in, one hand on the wheel, the other on the ignition as you tried desperately to tame your fluttering heart and look calm, composed, and above all responsible while an adult in the front-seat beside you — a parent or driver’s ed instructor — anxiously squawked instructions, reminders, advice, and warnings about the perils of the road ahead?

Good!  Then you can empathize with a young summer tanager (Piranga rubra) getting ready to leave home and start a crash course in adulting.

Or with any fledgling bird, really, but today we’ll headlight a teenage tanager.

Dad in his hot dog red suit and Mom in her mustard yellow plumage watch with parental trepidation as their offspring lurch out of the nest and merge awkwardly onto the road to maturity.  I’m sure human parents can relate.

When it comes to schooling, H. sapiens and avians are birds of a feather. People often talk about non-human animal behavior in binary terms — instinctive or learned. But the more accurate metaphor isn’t one or the other, it’s shades and tones, with most birds and mammals, including humans, sitting closer to mid-range grey than to black or white… a hybrid approach where instinct primes the pump but practice quenches the thirst.

For example, standing upright and moving forward on two legs is instinctive in humans — just try to stop a toddler intent on winning the gravity game — but before we can act on that impulse our bodies have to grow and develop, we have to gain some control of our muscles, then we have to attempt standing and walking, many times, before we can run.

Likewise, flight is an instinctive behavior for birds (with some exceptions). Emerging from the confines of their shell, unfolding like origami, these babies are equipped from day one for the wingéd life… still, they must follow a similar growth and learning curve to reach their highest potential. 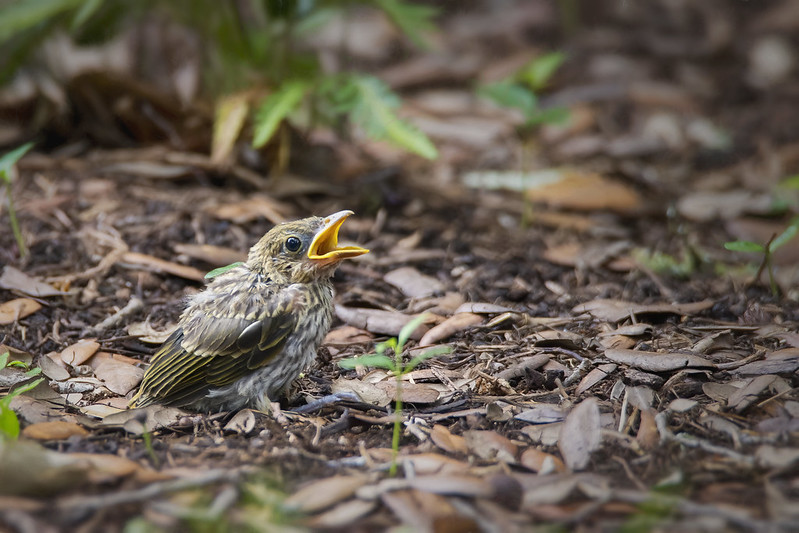 We’ve all been there… too mature to remain home-bound, too immature for complete independence. Yet many people are surprised to discover that fledglings remain grounded for a while after leaving the nest.  We would never expect an 8 month old child to wake up in her crib one day, lower the side, climb down to the floor, and calmly stroll into the kitchen looking for breakfast. But, somehow, we do have an expectation that a barely feathered chick can vault directly into the wild blue yonder, with the skill of a seasoned pilot no less, their very first time out of the nest and into the cockpit. 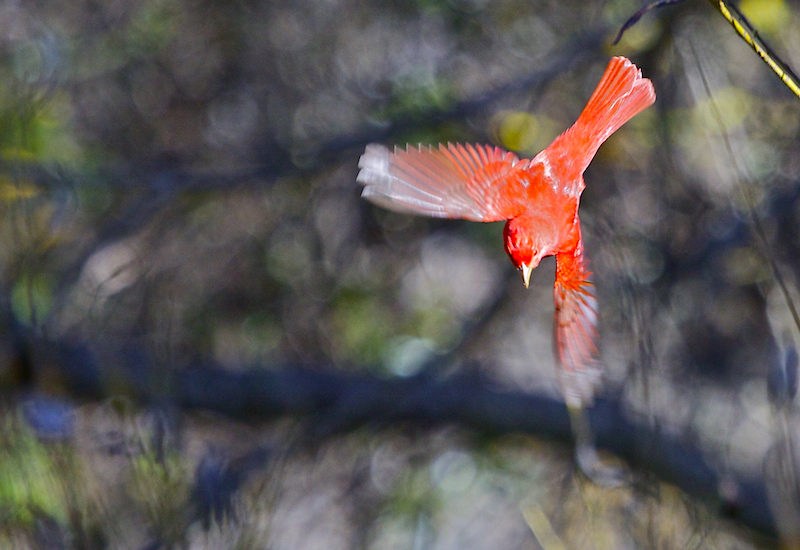 Walking and flying are only the beginning of what kids need to know to succeed. There’s a whole curriculum of life skill topics to master and scholarship is required of all boys and girls.

For instance, mobility requires energy. Therefore, even as a young tanager-in-training practices her lift-offs and landings, building the muscle stamina to sustain flight, she has to simultaneous learn how to refuel… and she’s got about three weeks to figure it out before Mom and Dad turn their attention to feeding younger siblings.

Summer tanagers shop in both the produce and the protein sections of nature’s market. Nearly everything on the menu is ready-to eat — bounties of berries while at the summer homestead; citrus and bananas while waiting out winter in Central America; terrestrial and flying insects year-round.

There are some exceptions to this grab and gulp approach to mealtime. Bugs have a semi-rigid exterior that may cause a scratchy catch-in-one’s-throat feeling, especially beetles. Before sending them down their own or their offspring’s hatches, tanager parents will vigorously bash these six-legged morsels against a harder surface a few times, kind of like tenderizing a steak. Fledglings watch and learn this easy-to-mimic this skill. It must be said, however, that summer tanagers are especially keen on consuming bees and wasps, darting in and out of their preferred forest gap-and-edge habitat to snatch these tasty snacks right out of the air. Swallowing a stinger can result in a seriously sore throat, though, so this favorite food requires a techniques demonstration every bit as important as learning to respect and safely use a knife To indulge in this repast, young tanagers must not only learn how to remove the venomous spike by scraping the bug’s belly against a branch, they also have to recognize which insects require this extra prep step.

Communications, sung and signaled, are compulsory classes in a tanager’s first summer as well. Tanager nestlings can recognize their father’s refrain in a cacophony of ambient sound, etching that tune in memory for future reference — males will use the template to practice and perfect the 2 to 4 second courtship theme of slurred whistles and pauses passed down through generations, note for note; females will choose a mate based on how closely his anthem resembles dear old Dad’s.

Adults converse about day-to-day activities with short pit-ti-tuck clicks, and may argue over property rights with neighboring nesting pairs in whining laments. The disputes rarely progresses past raise voices and mild name-calling because there’s a common protocol learned by all summer tanagers in chickhood and followed by all.

Last but not least, socialization is an important part of growing up. Community elders tend to forgive the transgressions of youngsters but that tolerance lessens as tail feathers lengthen. As a rule, summer tanagers are solitary creatures, but mixed-flock feeding crowds in winter require familiarity with and adherence to the rules of civil society.  Every kindergartner knows them well but it never hurts to review:

A.  Be patient and take turns. 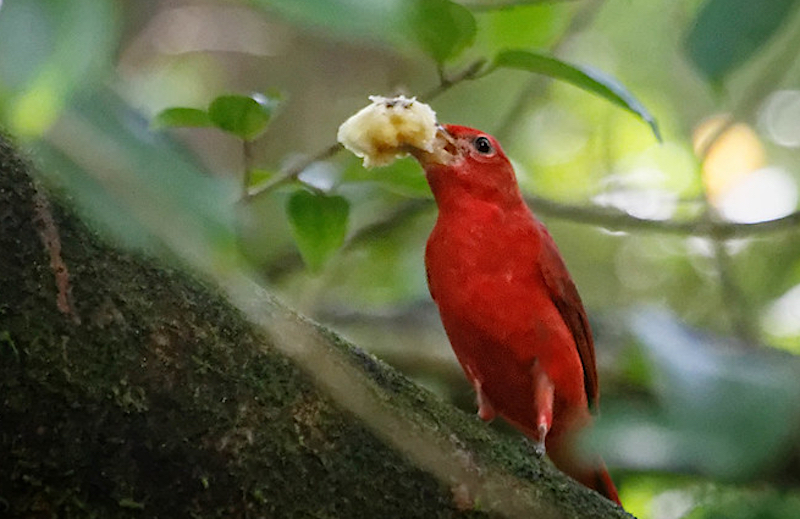 C. Don’t be too self-involved.

And the most important lesson of all?  Nobody likes a bully. 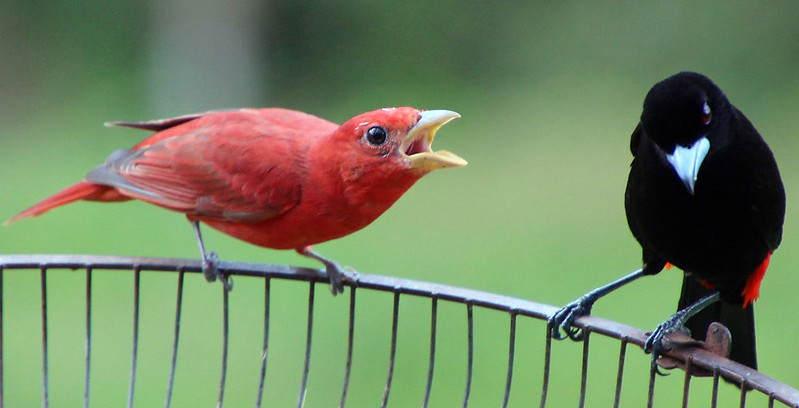