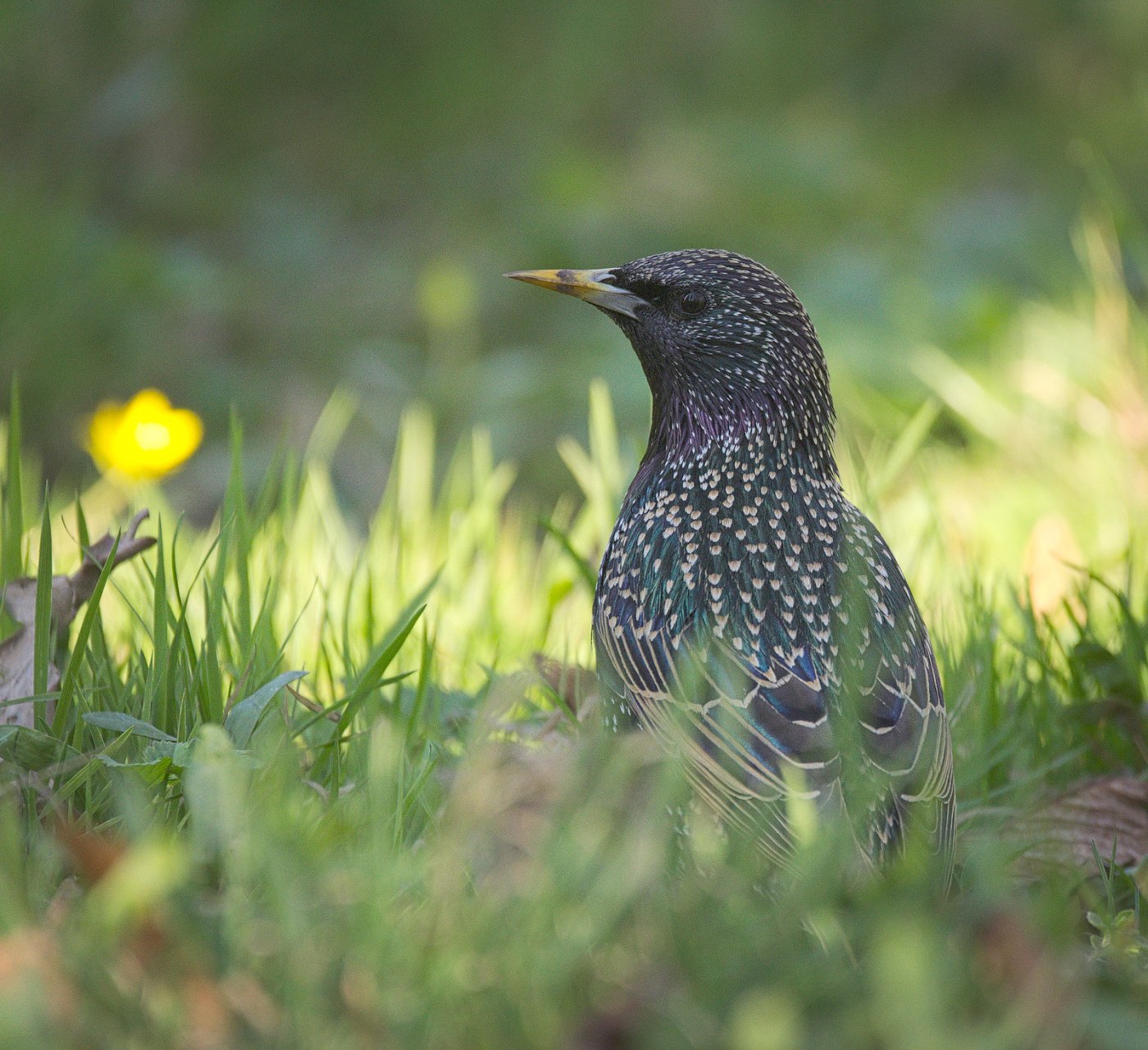 Sometimes the grass really is greener on the other side of the fence, especially if your yard-care ethic is benign neglect, and your neighbor is a wannabe greenskeeper. Generally speaking, though, the sentiment behind that familiar grassy idiom is sound—we humans tend to value what others have more than what we ourselves have, and the more of something we have the less we appreciate it.

That’s as good an explanation as I’ve heard for our love-hate relationship with the common starling (Sturnus vulgaris), an abundant, medium-sized passerine bird who shares our strong affinity for lawns.

Human immigrants who had left Europe to make a life for themselves elsewhere on the planet had to have experienced pangs of homesickness, even if they were grateful for the chance at a fresh start. Under such circumstances it’s natural to attempt, consciously or unconsciously, to make your new world as much like your familiar old world as possible. In the mid-1800s, transplanted Europeans intentionally imported the starling, a familiar avian feature from back home, first in Melbourne, Australia (1857) and Aukland, New Zealand (1862), then New York City, (1890) Cape Town, South Africa (1897), Saint Kitts (1901) and Jamaica (1903) in the Caribbean, and in the mid-20th century a release in Venezuela (1949).

Some of the earliest introductions purportedly had the practical goal of attempting to control native insect species that had switched en masse to cultivated crops once their native habitat was cleared to make room for settlements and agriculture; in North America, however, starlings were introduced to satisfy an aesthetic preference. The American Acclimatization Society was founded in NYC with the stated goal of introducing European flora and fauna. The group’s president, Eugene Schieffelin, wanted Central Park to be a living tribute to William Shakespeare so he made repeated attempts to establish populations of every bird species mentioned by the Bard. 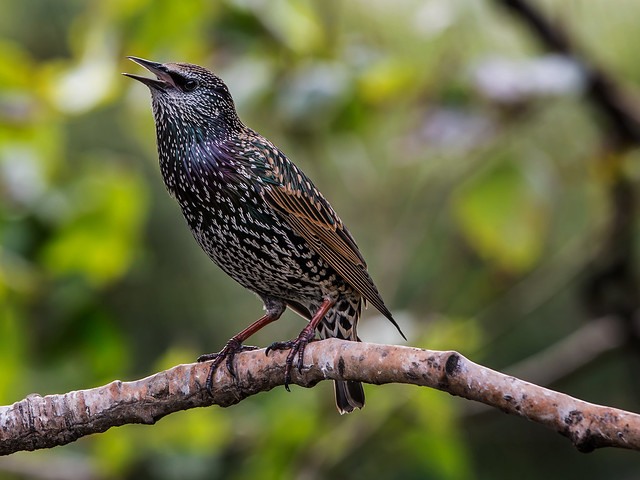 Regardless of the true motivation of their patrons, nearly all the world is now the common starling’s grassy stage.  As the saying goes, if you can make it in New York, New York, you ought to be able to make it anywhere. Starlings seem to have taken that maxim to heart.  Once established in the Big Apple, starlings proved quite adept at using the immigration assistance provided by Homo sapiens to expand their range even further. Breeding populations can now be found across the whole of North America, as well as Australia, Polynesia, the West Indies, South Africa, Namibia, and Botswana. The Venezuelan population disappeared but then in 1987 common starlings were observed nesting in Buenos Aires, Argentina, and have since spread out along South America’s Atlantic Coast.

The fates of humans and starlings may be inextricably linked, and we certainly have a great deal in common. For example, both species are highly sociable, which may provide some insight into why, over time, we’ve each flocked from rural, agricultural fields into more densely populated cities and suburbs. Starlings congregate in massive clouds of pulsing wings called murmurations, while humans convene to form increasingly gargantuan metropolises.

Human developments are as attractive to starlings at they are to humans, and one reason for this is the aforementioned love of lawns shared by the two species. That innate attraction to grassy landscapes is, in the case of starlings, more than just a subjective preference. It’s bred in the blood and bone. Literally. As people have selectively cultivated turfgrass for characteristics such as dense growth patterns, we’ve also influence the evolution of the starling’s skull and jaw muscles, allowing members of this community to forage more effectively for food hidden in the thickening tangle of green blades and thatch.  This trait, combined with flexibly omnivorous feeding habits, a willingness to raise young in almost any natural or man-made nook or cranny, and the ability to tolerate and exploit their human neighbors, has made common starlings an immigrant success story. 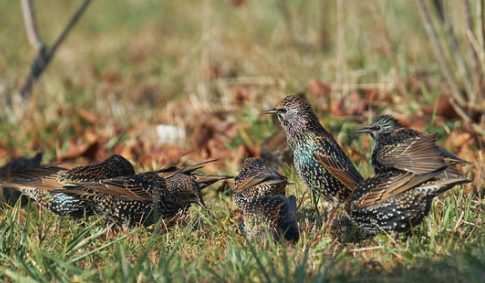 Since people not only put out an expansive sod welcome mat for these birds, initially, but also kidnapped and forcibly relocated the first arrivals, one might assume we’d take more pleasure and a little pride in their triumph. After all, starlings provide an invaluable service by controlling invertebrate pests. They have an extensive, generally pleasant vocal range and a real talent for mimicry—each starling composes a personal repertoire of singular notes, cover tunes, and ambient natural and anthropogenic sounds.

Moreover, starlings certainly add color to the landscape. Any unbiased observer would agree that these birds are an impressive example of avian beauty, clad as they are in iridescent black feathers that shimmer amethyst, sapphire, alexandrite, and tourmaline, and wings edged in citrine. In season, they sport an added sparkle of diamond-colored sequin-spots.

Besides, everybody loves a winner, right?

Well, yes… but only to the point at which our admiration tips over into envy.  “You can do it!” may change to “Who do you think you are?” in a New York minute. All it takes is a wardrobe deemed a tad too flashy by the other mothers, a carpet of emerald zozia coveted by the guy next-door in a never-ending battle with brown spots and white grubs, and before you know it the neighbors are airing dirty laundry and gossip is spreading like crabgrass.

To be fair and balanced, some of the criticisms swirling around the starling community are based on fact. True, in large numbers they can be a little loud but they’re certainly not the only rowdy neighbors on the block. Yes, they often supplement their insect diet with snacks from backyard feeders, berry bushes, and garbage cans… who among us doesn’t have a weakness for some kind of forbidden fruit or trashy food? Starlings are not the tidiest housekeepers when there are youngsters in the nest, and I’m not going to deny that when a sizeable group gathers in treetops to roost for the night they can leave a substantial mess on the cars and sidewalk below.

More concerning, from a conservation standpoint, is that reliable witnesses report aggressive assertions of ownership over vacant nesting cavities that some less self-assured feathered folk find off-putting. Such are the realities of a hot real estate market. Even so, a 2003 study of the potential impacts of common starlings found little in the way of detrimental impacts to any of the 27 North American species tested, with the exception of sapsuckers (Sphyrapicus spp.).

In other words, the ongoing whisper campaign and derogatory nicknames (e.g., sky rats) intended to vilify these prosperous “outsiders” are slander. Humans have had far greater negative impacts on the habitat and survival of native birds, on every continent, and starlings are a plentiful and handy scapegoat.

The fact is, we brought the lawns and the lawns won.  Starlings simply learned how to live within the lawn. 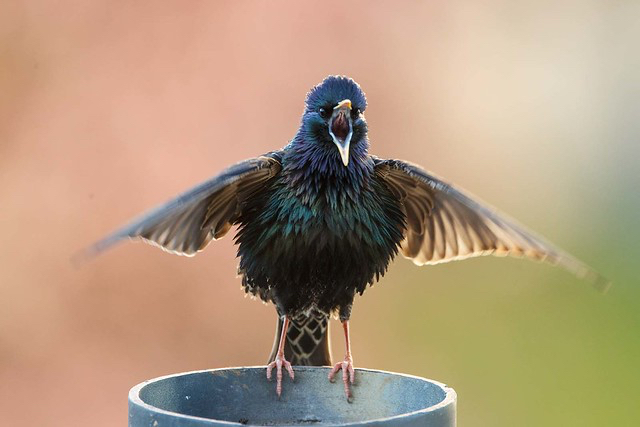 Consider switching to full-screen to view this video… It will take your breath away. KL

For more information on the common starling, you may enjoy this YouTube video.