Arrrggghhh!  I can NOT get that song out of my head!!  I don’t know where I heard it, maybe the grocery store’s Music to Inspire Endcap Impulse Purchases station. It’s familiar but definitely not a favorite. I have eclectic musical tastes that span eras and genres, so why is it that my cranial jukebox defaults to the tunes I loathe?

Not even the whole tune, just a few bars of the chorus. I can’t explain it. All I know is that Rick Astley has his hook firmly embedded in my frontal lobe and he’s never gonna give me up, never gonna let me down, never gonna run around and desert me.  I’m not too shy to say it, Rick—for the love of FM radio, please forsake me!

And now the contagion has jumped to your brain as well, right?

Perhaps our own experiences with the infinite loop playlist can arouse empathy for the male red-eyed vireo (Vireo olivaceus), who has been known to whistle snippets of a ballad more than 20,000 times a day, from dawn to evening, in search of love. Folks, that there is some serious Tinder swiping. Then again, we’ve already established that this fellow is a tad manic when it comes to finding a mate.

Stocky by vireo standards, you still might be surprised at the sheer volume of song that can be blasted from a boombox measuring 4¾ to 5 inches long (12-13 cm, beak to tail-tip) and weighing in at 0.4 to 0.9 oz (12-26 g). As evidenced by the Latin moniker, this songster is mostly unremarkable olive-green, transitioning into sunnier chartreuse on the sides and beneath the tail, balanced by a pale silver belly below. The REV wears a nickel-gray crown with ebony eyebrow and eye stripes below, separated by a streak of chalky white. But this bird’s definitive identifier is the red eye from which its common name derives. The iris changes color in the second spring of REV life, from brown to tones that span the spectrum from brick to scarlet. 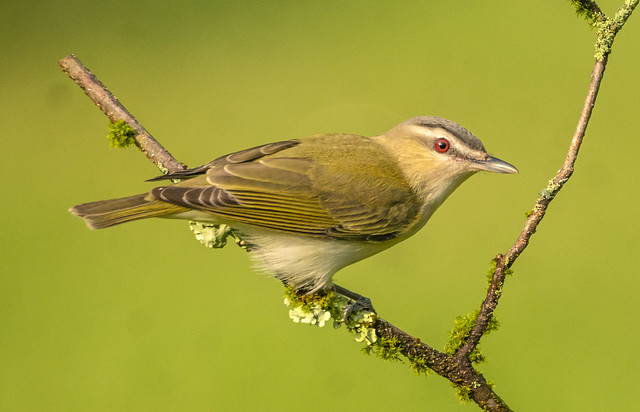 REVs are creatures of the Americas, splitting their time between North (spring and summer) and South (fall and winter).* Wooded areas with a shrubby understory are their child-rearing locales of choice but they’ll adapt to urban and suburban greenspaces with enough large trees to make them feel at home. I happen to live just two blocks from the oldest city park west of the Mississippi River, and the towering centenarian trees of Lafayette Park meet the vireo criteria.

Once a male REV touches ground after an international flight and is home back in old St. Lou, he’ll establish a territory and begin broadcasting his availability by calling any available chick in the neighborhood. Using his signature one-to-five syllable ringtone, he’s the vireo equivalent of a mash-up between speed-dialing and speed-dating, chanting all the while that he’s too sexy for his beak, so sexy you’ll be weak, too sexy for his tail, so sexy he’s all male, too sexy for his wings, that’s why he has to sing, sorry he’s been gone so long, but he’s too sexy for this song. 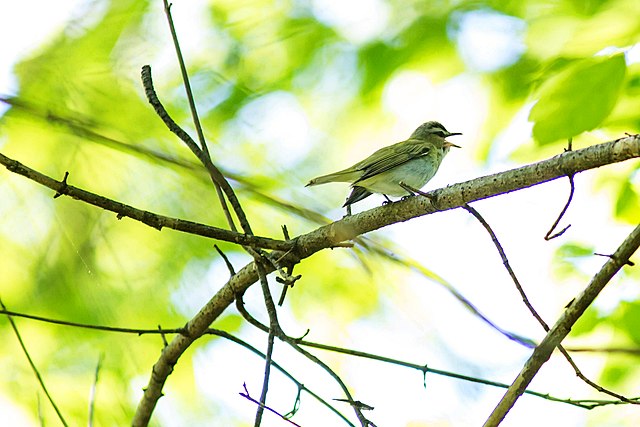 Is there a foolproof way to rid oneself of an earworm? I’m not sure it’s a problem for REVs — once the sun goes down the vireo Victrolas wind down, too, and they seem to sleep well enough at night to wake up singing early the next morning. Nonetheless, vireos do have an effective strategy for dealing with other types of worms: just eat it, just eat it, don’t you make me repeat it!

I’m not insectivorous so eating a caterpillar sounds more like a dare than a cure. On the other hand, the thought of telling Rick that we are never ever ever getting back together is mighty tasty.

*There are several subspecies that are year-round southern hemisphere residents, but the great majority of REVs are migratory.