Fillet of a fenny snake,

In the caldron boil and bake,

Eye of newt, and toe of frog,

Wool of bat, and tongue of dog,

During late October, Shakespeare’s recipe for chaos and conflict comes to mind with the sudden appearance on our very doorsteps of all manner of terrifying witches, ghosts and goblins… and political advertising.

The former can be bought off easily enough with bite-sized Butterfingers (a sticky booby trap that guarantees revenge for the extortion in the form of future dental bills).  The latter are a bigger headache, far more demanding, and incredibly persistent. It takes more than a simple head of garlic and the promise of your vote to repel the legions of wannabe legislators. What American needs now, more than ever before, is a magical charm … a powerful protective talisman to ward off bleary-eyed baby-kissing, hand-shaking, promise-making shape-shifters.

The amphibian kind; NOT the mammal and former Senator from Georgia.

“Powerful” is probably not the first word that comes to mind when you spy a newt in any of its four developmental stages. Each egg, attached to an aquatic plant during the main breeding season of June and July, is actually quite vulnerable, even when the female makes an effort to fold it inside a leaf. Nor is the larval tadpole menacing when it emerges about three weeks later. That is, unless you are algae, a small invertebrate, or a sibling (fratricide is an all too common practice in this sweet old eat-and-be-eaten world of ours). 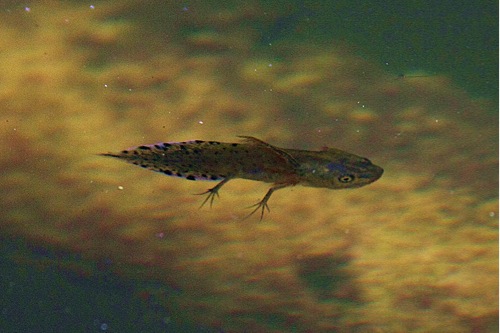 Over the next several months, however, a metamorphosis as extreme as any werewolf’s takes place. Where once only a big-eyed head and tail existed, legs buds sprout and lengthen. Feathery external gills are absorbed, replaced by internal lungs. Fully formed efts, as they are now called, will then drag themselves on stubby legs out of the natal pool and venture onto dry land … but the scene doesn’t evoke Creature from the Black Lagoon panic.  At two to six inches in length, adult newts are easy to overlook, generally more slender than their salamander cousins, and not physically threatening in the least.

It’s during the larval transformation that some species also develop a bright, cautionary coloration that hints at their ingenious and formidable defense strategy:  toxic slime. 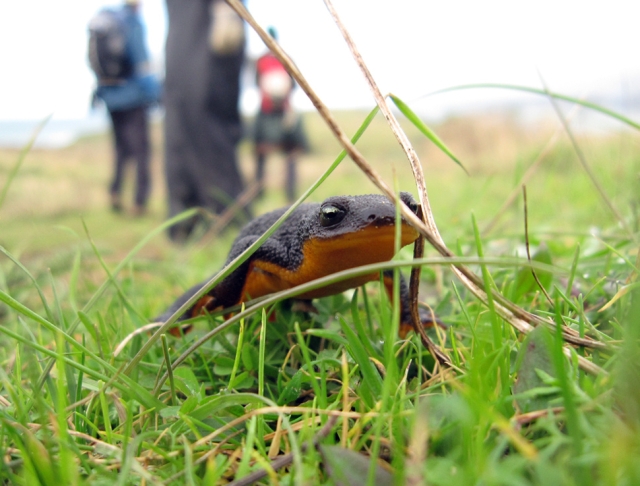 All amphibians carry potentially harmful bacteria, such as salmonella. The California (Taricha torosa), rough-skinned (T. granulosa), and the red-bellied (T. rivularis)—known collectively as the Pacific newts*—aren’t satisfied settling a score by giving their adversaries some stomach cramps and the runs, though. They practice biological warfare, secreting tetrodotoxin (TTX), one of the most potent neurotoxins known to science.  TTX, which gets it’s name from the pufferfish (Tetraodontidae) that also carries this poison, is deadly when ingested or when it comes into contact with mucous membranes or breaks in the skin. Within as little as 20 minutes after consuming the toxin the victim will experience respiratory paralysis, and there is no antidote.

Perilous times call for strong medicine but just to be clear, I’m NOT suggesting that poisonous amphibians should be used to rid the world of legislators. Only that in our effort to demand more from elected officials than the ability to raise money and speak in soundbites, we might gain inspiration from a small, seemingly insignificant creature with hidden powers disproportionate to its size.

Or a voter (not to belabor the point).

But maybe we should heed the lesson of Macbeth’s witches, who certainly knew a thing or two about politics and ambition, and take precautions to insure that newt-power is used exclusively for good and never for evil. After all, Order Caudata, with their ability to regenerate limbs and tail, as well as eyes, hearts, intestines, jaws, and spinal cord, are the envy of many a zombie… and any politician who wants to transform (temporarily) into a more centrist candidate following a contentious primary season.