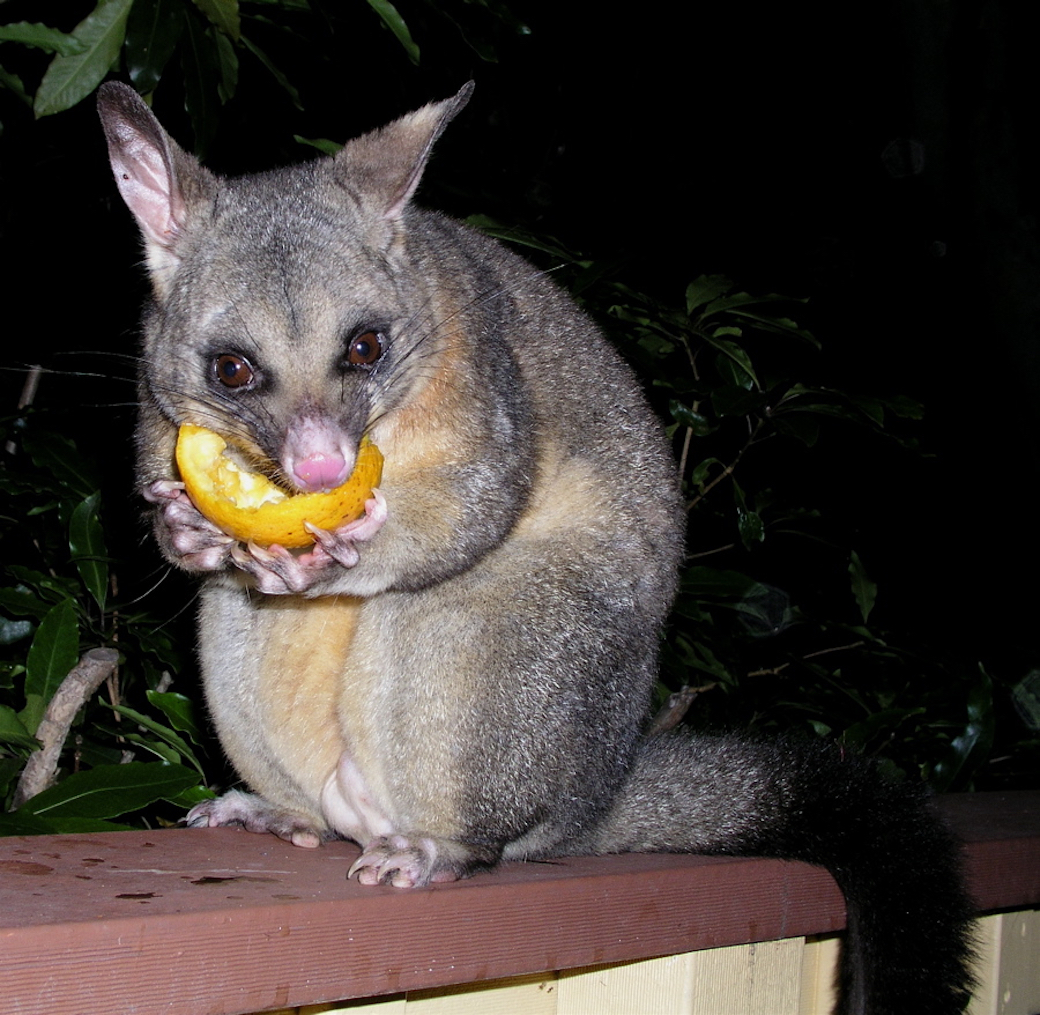 Consider, if you will, the sartorial importance of tail attire.  To bare, or not to bare… that is the question.  The answer might seem to be of little consequence, but for marsupials living in cities and suburbs some strategically placed fur can make all the difference.

That’s because naked tails make people nervous. I blame this bias on the Black Death. Of course, now we know the true culprit in that famous pandemic of 1347 was not the rat, but the infected fleas that hitched a ride on those hapless rodents. Since standards of human hygiene at the time were rather… haphazard, shall we say, there were plenty of opportunities for the insects to hop onto a handy human. We may not remember why rodents make us uneasy but the bias remains to this day.

How else do you square our acceptance and even advocacy of squirrels and chipmunks, for example, with our abhorrence of rats and mice? As Carrie Bradshaw of Sex and the City fame so wisely observed, “A squirrel is just a rat with a cuter outfit.” Clothes make the man and the mammal.

The same could be said of the common brushtail possum (Trichosurus vulpecula) and its cousin the Virginia opossum (Didelphis virginiana). Both are omnivorous marsupials of similar size and weight. However, the former has a hirsute terminus while the latter’s prehensile appendage is as furless as a snake. Brushtails are the source of much frustration among Aussie homeowners who, nonetheless, demonstrate great fondness for this plush-toy wannabe. The North American model does not enjoy a similar degree of affection from its human neighbors (to put it mildly).

Is this inequity mere coincidence? I think not—if you ask me it’s blatant bare-tail bigotry!

Personally, I find the adult Virginia opossum to be a handsome creature and their young ones winsome and endearing.  But—let’s face it—we only have one marsupial here in the U.S., so there’s no competition for best in show.

It’s a different story in Australia, where possums* and the closely related gliders account for approximately 30 of the continent’s 140 marsupial species. Brushtails are attractive animals by any aesthetic standard, with thick, luxurious fur that ranges in color from silver-gray to cream, brown, black, and even red, depending on the subspecies.

As the name implies, the common brushtail is a familiar resident along much of coastal Australia including the major metropolitan areas such as Sydney, Melbourne, Brisbane, and Perth. Suited to a wide variety of habitats, from rainforests to semiarid regions, this semi-arboreal (tree-dwelling) possum has adapted readily to urban life, trading traditional tree cavities for a home under the eaves.

Brushtails can breed at any time during the year, but there are two peak seasons—from September to November (southern hemisphere spring) and from March to May (Australian autumn). Following a 16-18 day gestation, the female gives birth to a single blind and extremely underdeveloped child who scrambles unaided up to her pouch. Once inside, it will attach to a teat and remain there for another four or five months, after which it will either stay home at the den while Mom goes out to forage or ride along on her back, sharing any groceries she finds while learning what and where to eat. Male possums are not involved in child-rearing.

Human or non-human—if you want to succeed in the urban jungle, it sure doesn’t hurt to have a pretty face. Brushtails have large ears perched on a rounded head, a pink nose and dark liquid eyes… and they don’t seem at all shy about working their assets to full advantage. They may have learned a thing or two from eastern gray squirrels (Sciurus carolinensis), introduced to Australia sometime between 1900 and the 1930s—there’s just something about watching a furry creature nosh while holding the treat with two hands that people find irresistible, apparently, because hand-feeding fruit treats is a popular past-time. 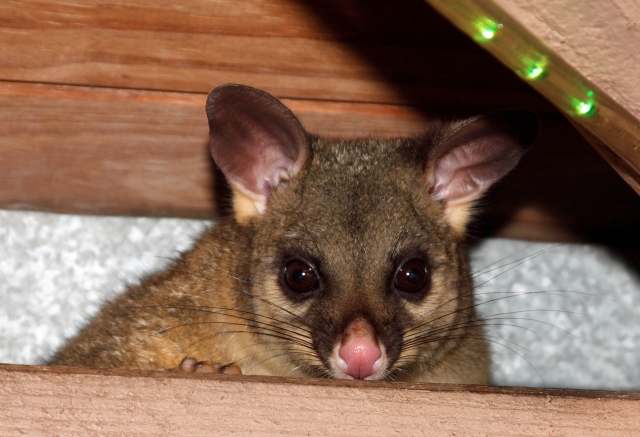 There’s a down side to this Down Under hospitality, though. With warm, dry sleeping berths and plenty to eat, brushtails haven’t found it necessary to step lightly on the Earth… or in the attic either.  Their heavy-footed nocturnal comings and goings and loud vocalizations are responsible for plenty of sleepless nights and lost tempers. Brushtails often wake the neighborhood dogs as they wander through the neighborhood via utility poles and fencing, creating the same kind of hard feelings directed at Virginia opossums on the other side of the globe, for the exact same reason.

When not snacking on handouts from the produce section they will munch on magnolias, roses, and other selections from the flower garden as well as on eucalyptus and other trees—Aussies do not consider this one of the brushtail’s more appealing qualities. And, like their northern hemisphere kin, brushtails will dumpster dive and help themselves to the back porch pet food smorgasbord, resulting in much hair-pulling and teeth-gnashing by Homo sapiens.

Yet, somehow, brushtails seem largely immune to the vilification of their less charismatic cousins. To the cute (and furry-tailed) go the spoils, I guess—it’s an all too familiar tail and decidedly unjust. But as my mother (and probably yours too) always said, “Who told you life is fair?”

One thing’s for sure, it wasn’t a ‘possum.

[This one is for Barb at Passionate About Pets and People. Thanks for your support and encouragement!]

* Although both are marsupials, it is commonly accepted that the Americas have opossums (colloquially referred to as ‘possums) while Australia has possums. Yes, it is confusing. No, I don’t know why or how this came to be. Even in the 21st Century there remain great unsolved mysteries.

19 thoughts on “Bright-Eyed and Brushy-Tailed”