Us Against the World

It’s such a familiar story I probably don’t need to spell out the rest.

Ah, but folks like stories to have a beginning, a middle, and an ending, don’t we? Ok, ok… so a male and a female find one another.  They “meet-cute” (the classic contrivance of romantic comedies), or through the efforts of micro-managing parents (the historically classic approach), or online, or in one of a million completely unremarkable everyday ways—the “how” doesn’t matter (to anyone else).  A spark catches. A bond is formed—over time, at first sight, or by rite (mating or marriage rituals, depending on one’s religion, politics, or species). They find a home, start a family, and live happily enough ever after (fairy tales tend to gloss over the details of that last part).

It’s a comforting, feel-good saga. But it’s not the stuff legends, of Pulitzer Prize novels, or Oscar winning dramas. No, for that we need a star-crossed couple, thwarted by outside forces. We need Romeo and Juliet. Catherine and Heathcliff.  Edward and Bella. Or a pair of coyotes.

Wyle E. and the Mrs. may not be icons of romantic literature, but one would be hard pressed to find couples more destined to misfortune than those of the Canis latrans clan. It’s all here—blood, poison, class, caste, honor, artifice, cruelty, revenge… and then some. After all, the persecution most luckless lovers experience only lasts three Acts, or about 100,000 words. Coyotes have been wearing a target since shortly after European settlers, and their livestock, came to North America in the early 15th Century.

Many species have disappeared into extinction under far less pressure yet, despite hundreds of man-hours and billions of dollars spent annually to wipe coyotes off the face of the Earth, as a species they continue be fruitful and multiply, to survive, and even thrive.

Unlike their close relative the wolf (Canis lupus), their range has expanded in response to human development (and programs to exterminate wolves, a key natural competitor). Prior to 1700, coyotes were creatures of the prairies and deserts of the central United States and Mexico. Now they can be found as far west and north as Alaska, in all but the northernmost reaches of Canada, across the entire “lower 48,” and much of Central America, and in habitats as diverse as protected wildlands and urban centers.

How is this possible? Chalk it up to intelligence and adaptability. Behaviorally, coyotes are as flexible as a yoga instructor about everything from where to live, what to eat, and even family size and composition.

By 12 months of age—and there’s about a 60% chance they’ll survive their first year—coyotes are old enough to start looking for a mate. They don’t always leave home or settle down right away, though. Adults may live alone (for at least part of their life), in pairs, or in packs comprised of an alpha male and female and their offspring from previous years.  Once mated, they form perennial, monogamous bonds; however, on average, “till death do we part” is only a couple of years. In captivity, coyotes can live about as long as domestic dogs (Canis familiaris)—13 to 15 years—but in the wild few live to see their third birthday. Dying young is a familiar theme for the romantically doomed, be they canid or primate. 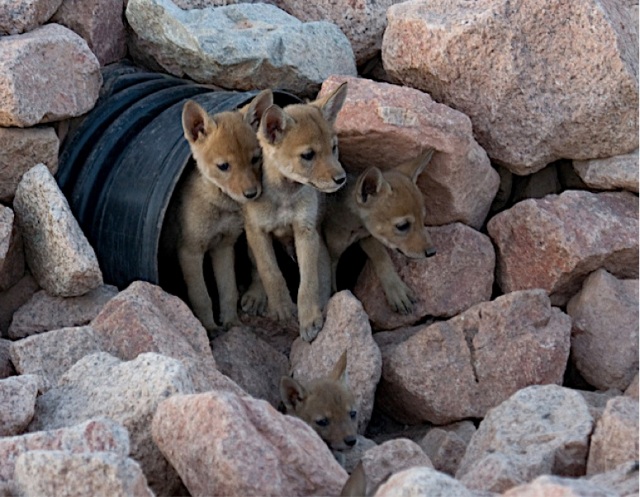 Everyone in the family unit—Mom, Dad, and any older sibs who haven’t left home—pitches in to rear the current generation of pups; it takes a village to raise coyote kids, too. Litters average four to seven pups, although—and here’s another example of that flexibility I mentioned earlier—coyotes can adjust their litter size based on the how much food is available and how many of their brethren live in the neighborhood. In other words, if humans remove (almost always by some lethal method) coyotes from a particular area, the population density falls, and during the next breeding season the number of pups per litter will rise. In the case of a pack, the loss of an alpha pair may cause the other members to disperse and find mates, so the area ends up with more breeding pairs than before any effort was made to reduce their numbers. One could argue that, however counter-intuitive it may first appear, extermination programs are a great way to increase your coyote crop.

Well, what do you know? Play your natural selection cards right, and it’s possible to turn the tables on those who try to sabotage your relationship and have the last laugh—talk about a plot twist!

Perhaps the folks who try to control coyotes would find it helpful to read a few Victorian romances. Then again, anyone who’s tried to keep besotted teenagers apart should understand that when it comes to ill-fated lovers, where there’s a will, there’s a way. Come to think of it, maybe Cyrano and Roxanne, Tristan and Isolde, and Jack and Rose should have taken a lesson or two from a couple of cunning characters dressed in fur. They may not have cheated death, but they might have managed to leave behind generations of children, and grandchildren, and great-grandchildren to tell their tale.  From Once Upon a Time to… 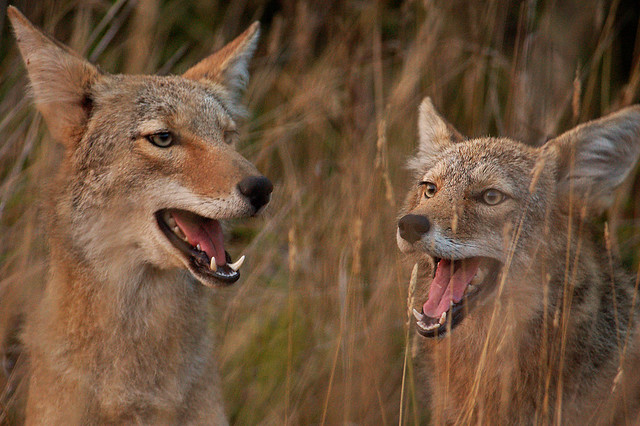 EPILOGUE:  Lest anyone think I’m unfairly choosing sides in the war against coyotes and other wild predators, readers should know that I understand the narrative presented above is not the whole story. I used a literary device to focus attention on a particular aspect of the coyote’s natural history—pair-bonding and social structure—and I intend to return to this and other species featured on this blog again and again over time, as is necessary to flesh out these complex and fascinating creatures.

While I may not always agree with their production practices, I don’t begrudge farmers and ranchers their right to make a living and protect their investment. I’m an omnivore who depends on the plant and animal foods they produce. However, I do find it strange that many who own livestock will point to the fact that coyotes, wolves, and foxes kill cows, sheep, and chickens as proof of their inherent cruelty, and as justification for implementing lethal control measures—even though many, if not most, of these domestic animals are being raised for food and will eventually be killed by the same humans who cry foul when the grim reaper appears on four feet in a pasture instead of on two at the processing plant.

As a biologist, I know that life feeds on other life. That’s the way of the world and I don’t see it changing any time soon. I just think we should be honest about our motives (and I’m aware that I risk offending some readers with what I’m about to say). It’s not that we don’t want that lamb or calf to be killed and eaten, it’s that we want to be the only ones who get to eat. That strikes me as fundamentally wrong-headed, because it perpetuates the idea that people are somehow removed from the natural world.

Here in the U.S., we’re already paying to have both livestock and predators on our public and private lands, and have done so for a long time.  But the true cost of tonight’s meatloaf or coq au vin isn’t visible on the grocery store receipt, in the form of the higher meat prices livestock producers might charge to pass along the cost of losses to predation (or non-lethal prevention methods), not to mention the carbon footprint of livestock production. Instead, part of the price of our food is disguised, hidden as taxes that support inefficient, ineffective, and often brutally cruel control programs. Personally, I prefer to know how much my dinner really costs, financially and ecologically.

You may disagree, as is your right.

11 thoughts on “Us Against the World”