According to the U.S. Environmental Protection Agency (EPA), Americans throw out 34 million tons of food each year—an average of 93 thousand tons per day, and some experts estimate the amount triples on Thanksgiving and Christmas. Food for thought, while making another trip to the garbage can following our national day of feasting. Waste not, want not… so the proverb goes. But does anything digestible really ever go to waste? Only if you think food is wasted when humans don’t consume it. 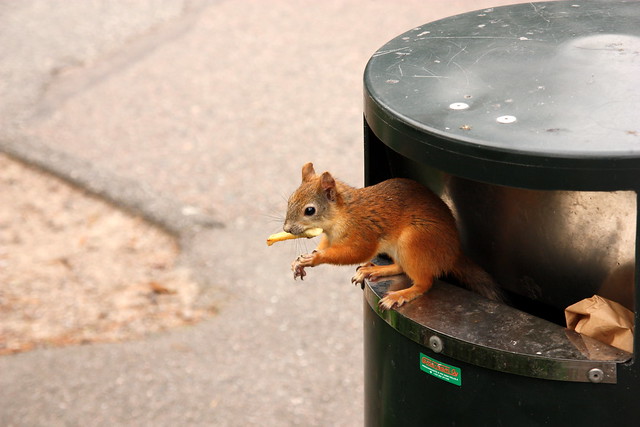 We live on a planet where, if someone can eat it, bet your bottom dollar someone does eat it. Within a biotic community there are three basic trophic (feeding) levels:  producers, consumers, and decomposers. Producers transform energy from the Sun into sugar (i.e. food)—that’s the work of green plants. Primary consumers eat the plants, secondary or tertiary consumers eat the animals that eat the plants. Decomposers transform both dead plants and animals back into their abiotic components (e.g., water, nitrogen, CO2). All three groups work together to create food, move it through the community, and return the abiotics back to the environment for another trip through the system.

Food travels through the community in food chains and food webs. A food chain is a simplistic model, a subset, for illustrating the relationship between a community’s trophic levels. For example:

The food web is a more realistic and complex model of the relationship between members of the biotic community. It takes into consideration the fact that most consumers eat more than one thing—vireos don’t just eat caterpillars, they eat a variety of insects, insect larvae, and spiders; sharp-shinned hawks eat all kinds of songbirds, plus some small mammals, and an occasional large insect; black vultures will eat almost any kind of meat, although they seem to prefer it well “aged.” A species can, and usually does, belong to more than one chain within the web. Very little is wasted, and everything that lives eventually takes a turn at eating and being eaten (with the exception of modern humans in the “developed” world, primarily due to our funereal laws and customs). 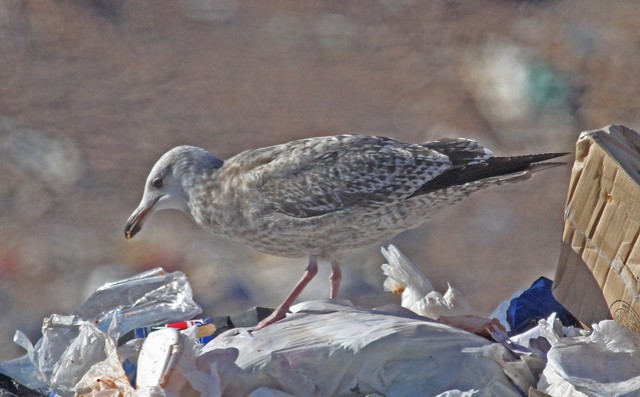 A large portion of the human population may have disentangled themselves from food webs but we remain an indirect source of nutrition for many non-human animals, and not just those we feed intentionally, such as our companion animals and livestock. Easy access to consistently plentiful human-produced food waste is a primary reason behind the success of many wild species in urban and suburban habitats. Garbage is also one of the main sources of conflict between wildlife and humans. This is due, largely, to the fact that—and I’m sorry but I don’t know how else to say this—the human race has some definite control issues when it comes to food.

The concept of owning food seems to be uniquely human, as is the idea that we should be able to stipulate who gets access to calories that we think of as “ours,” including future-food (crops and livestock), fast-food (from Petco or Wild Birds Unlimited), and former-food (garbage).

Skeptical? How many times have you heard a bird-feeding acquaintance complain when squirrels invite themselves to the backyard dinner table? Or even when the wrong kind of bird drops in for a snack? How about the U.S. Department of Agriculture (USDA), which spends millions of dollars annually on research and other efforts to reduce or eliminate wild species who like to avail themselves to a helping of the harvest? Consider, also, the time, money, and energy spent trying to keep wild creatures out of garbage cans and dumpsters, so their contents can be transported to the landfill and buried to prevent other non-humans from turning it into a meal.

Of course, there are valid reasons for managing food waste, including aesthetics and hygiene. Garbage stinks, and no one wants to live in the middle of a kitchen midden. You may be willing to share your cast off cuisine with resourceful furred and feathered recyclers but human neighbors tend to be less than forgiving about garbage-strewn lawns. Picking chicken bones and greasy bits of aluminum foil out of the lawn isn’t all that fun; even less so when you’re running late for work. It’s mornings like these when homeowners begin to formulate battle plans.

It’s a war we’ll never win. At its core, this is a first-come-first-serve, finders-keepers-losers-weepers kind of world, especially when it comes to food. Sure, a brief détente may be achieved through an exclusion technology arms race. Some may even seek vigilante justice against an individual opossum or raccoon, a flock of seagulls or crows.

Victory will be short-lived. There will always be more where those came from because our leftovers are the raw materials from which the next generation of wild dumpster divers are created. Urban wildlife are adaptive, creative, resourceful, and fecund. They are adept exploiters of the humans with whom they live.

Still, in most ways it’s a symbiotic relationship. They take the food we no longer want and, in exchange, add to our quality of life in ways that are easy to recognize and hard to measure. Moreover, by refusing to accept that we are masters of the universe they keep us humble.

And for that, I am thankful.