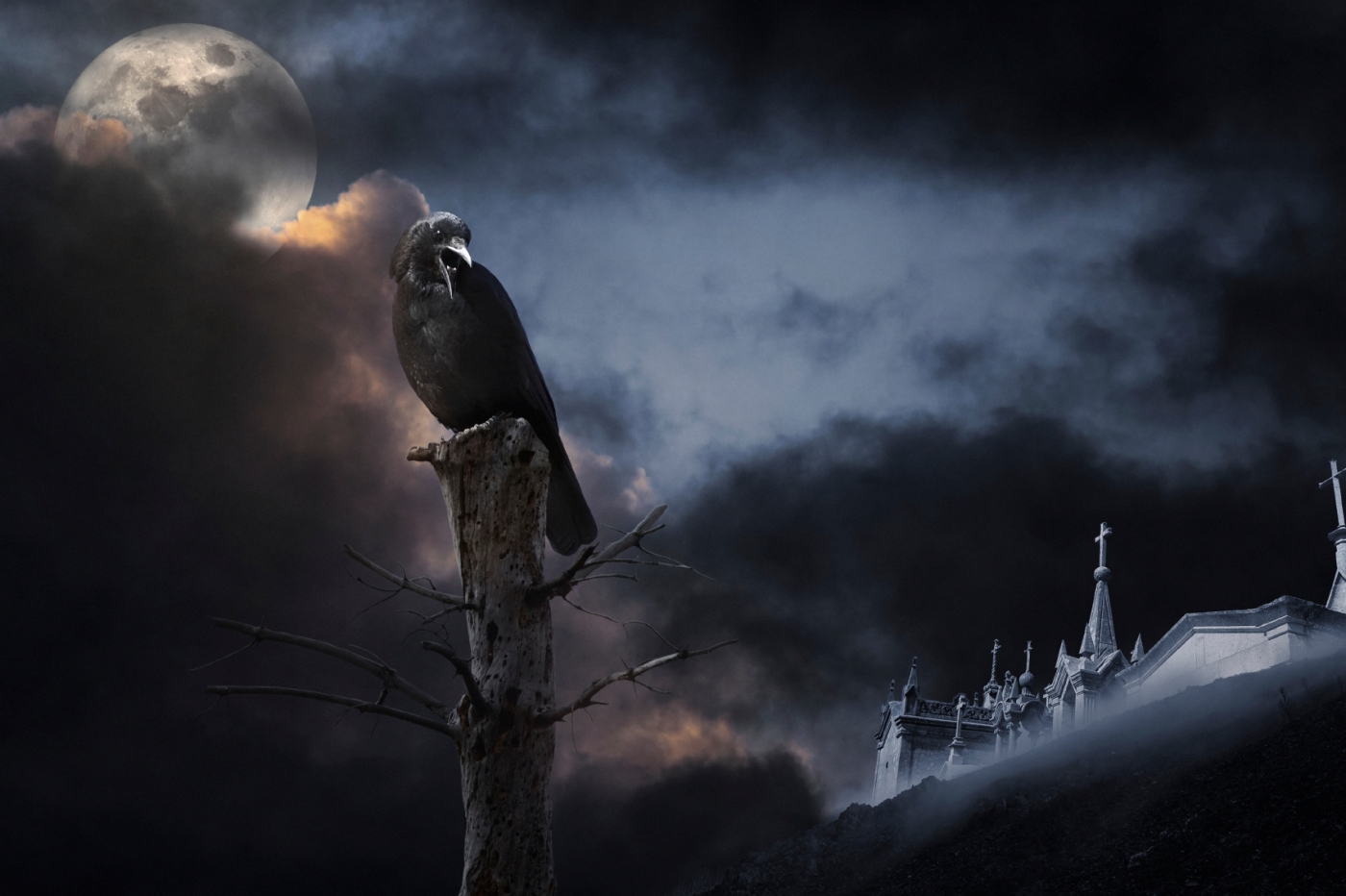 Fright-night is lurking just around the corner. Frankensteins, mummies, zombies, ghosts, and golems will soon leave their lairs to roam freely through our cities and suburbs, searching for something to eat. Butterfingers, Baby Ruths, and brains—oh my! 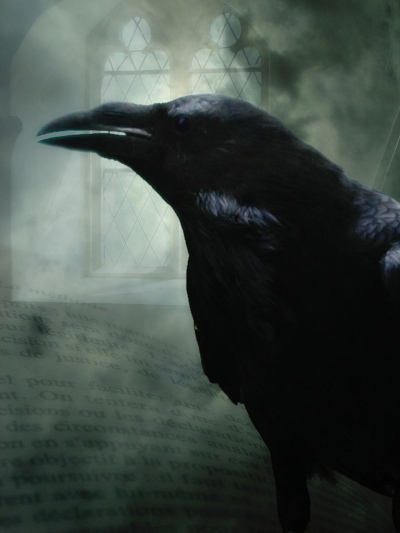 Reanimated but mindless creatures? HA! They don’t scare me. It’s the ones I’m not so sure I could outsmart that give me nightmares. You know… Hannibal Lecter. Patrick Bateman. Brilliant but mad scientists. Shape-shifters, tricksters, and ravens.

That’s right—it’s Poe’s gently rapping, tap-tap-tapping apparition, the common raven (Corvus corax), that keeps me up at night. Similar in appearance to the American crow (Corvus brachyrhynchos), but larger and more slender with a wedge-shaped tail and a heavy, arched beak—a santoku blade to the crow’s steak knife.

Now, understand that I’m not implying they’re evil… just that there’s definitely something spooky about a massive, inky bird with a genius IQ and an inclination towards… exploiting opportunities, shall we say.  Humans have long considered these birds both charismatic and ominous, fascinating and frightening. Spread across much of the northern hemisphere, ravens have stained the mythologies of native people 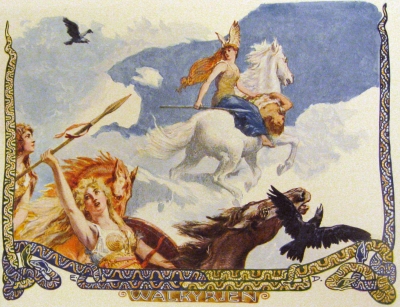 throughout their range. In Scandinavian cultures, this feathered carrion-eater was associated with war, blood, and corpses and their Valkyries—goddesses who decide which warriors will die in battle and who will be granted an afterlife in Valhalla—often were accompanied by ravens. The Celts made a connection between ravens, war, and death as well; true to their inherent interest in metaphysics, though, they also credited these birds with the ability to see the future, to move freely between worlds and, oddly enough, to play chess (rook is the common name for Corvus frugilegus, a European member of the raven-crow clan).

Mythology aside, ravens have been judged by humans to be among the smartest of all birds. That may be damning them with too-faint praise. Various studies in and out of the lab have tested researchers intelligence and creativity while they attempt to test the raven’s problem-solving skills. The jury’s still out on which party finds these efforts more enlightening. Ravens have been observed applying an understanding of cause-and-effect to the problem of filling an empty stomach—they learn to associate the sound of a rifle being fired during hunting season with the presence of a carcass (similarly loud sounds are ignored). Not content to simply wait for a scavenging opportunity, ravens will work in pairs or even larger teams, using a distraction strategy to separate adult birds and mammals from their vulnerable children, to gang up on prey too large for a single bird to overwhelm, or to defend resources and territory against neighboring gangs. Nature, it has been said, is red in tooth and claw, and ravens are definitely a part of that gruesome heritage.

There’s more to the story, of course—isn’t there always? Ravens are a threat to any number of wild youngsters, but they are devoted parents to their own offspring, who remain dependent for longer than many other bird babies. Both male and female are involved in parenting and are thought to mate for life.

Ravens aren’t as social as crows—they would prefer to go trick-or-treating alone or in pairs than in a mob—but they aren’t loners in the stereotypical serial-killer sense. During winter months they will form a flock, a.k.a. an unkindness (who comes up with these names?!), to find food during daylight hours and stay warm at night. 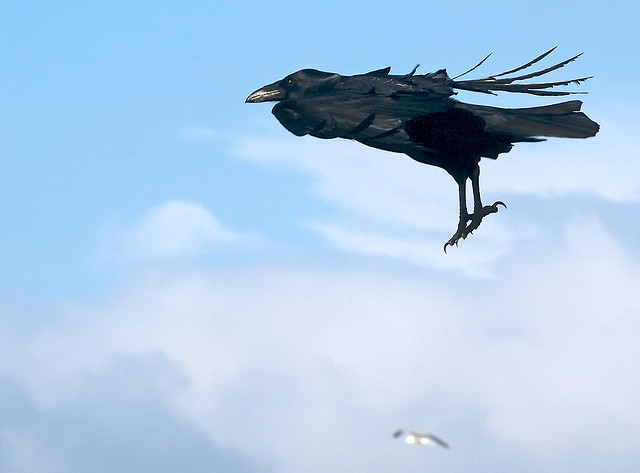 One very appealing characteristic is their sense of fun. Ravens are audacious, acrobatic flyers who take obvious pleasure in practicing dives, rolls, and loops, or even flying upside-down. I’ve personally watched ravens play with the wind blasting up the face of a cliff or a tall building, a sight that never fails to make me long for wings of my own. A favorite game, particularly among young ravens, involves climbing high in the sky holding some object, dropping it, and then racing gravity to catch it midair.

I also learned that here in North America, ravens have been assigned a very different mythological role than in Europe. Pacific Northwest legend has it they take a kind of noblesse oblige attitude toward the human race. Grandfather Raven is portrayed as a devilish philanthrope, a Robin Hood figure who stole the Sun, Moon, Stars, Fire, Water, and even Salmon from various deities and gave them to the people. How would you like to find those treats in your goody bag on Halloween?

Perhaps ravens, like so many scapegoats before them, have been unfairly vilified.  We should never forget that the job of predators and scavengers is thankless, but a crucial component of healthy ecosystems. French author Andre Gide may have said it best, “There are very few monsters who warrant the fear we have of them.” I think it’s time to change my thinking.  From this point forward, I’m going to dream of playful, benevolent ravens and be frightened nevermore.