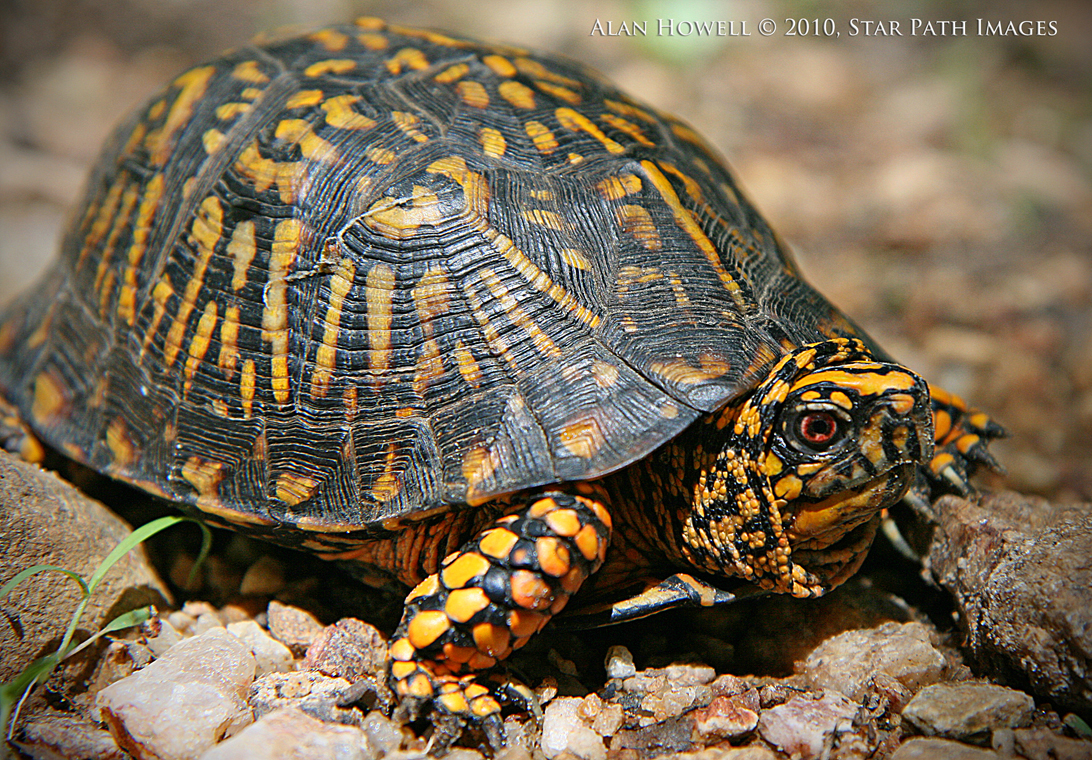 Sometimes you just need to shut out the world for a while, you know?

If you can’t relate, I know the eastern box turtle (Terrapene carolina carolina) certainly can. Whether the threat is carnivores or towers of cardboard boxes and a demanding career, there are times when nothing beats a little self-imposed solitary confinement.

Carrying your own personal isolation chamber on your back means sensory deprivation can be achieved in mere seconds. No need to call ahead for an appointment at the local day spa. Don’t bother dimming the lights, closing the blinds, and turning off your cell phone. Just pull in your extremities and slam your hinged shell shut—a little privacy, if you don’t mind!

Is it any coincidence that box turtles are one of our longest-lived species, with well-documented cases of individuals reaching the half-century mark and beyond? Stress reductions, in the form of a room of one’s own, may well be the key to attaining a ripe old age.

We shouldn’t dismiss the importance of wise food choices either—lots of lean protein, in the form of earthworms, snails, slugs, and insects, as well as fruits and veggies such as berries, grasses, and flowers.  Turtles have another favorite food that may contribute to overall longevity—they’ve been known to consume poisonous fungi, causing anyone who dines on their flesh to sicken, or worse. Of course, someone has to kill and eat said turtle, and suffer the consequences, which may not seem like much of a survival benefit unless you consider it from the standpoint of the population rather than the individual. See, all it takes is one or two bad meals and, ever after, turtles become a much less appealing meal for that particular consumer and his or her community. The technical term is adverse conditioning—that’s a polite way of saying animals (both human and non-human) tend not to keep eating things that make us vomit.

Now, it’s unlikely that turtles have any particular strategy in mind when eating wild mushrooms. Then again… certain “magical” fungi have been credited with providing, among other things, an increased sense of well-being and decreased anxiety levels. Perhaps they are self-medicating with the Terrapene equivalent of Xanax®.

One of six subspecies of the common box turtle (T. carolina), the eastern, like all its kin, has a highly domed carapace (the upper portion of the shell) and a hinged plastron (the lower half of the shell). What sets each subspecies apart is distribution and habitat, as well as certain physical characteristics.  T.c. carolina, found from southern Maine to southern Florida and as far west as central Texas, is known for colorful keeled carpaces that feature diverse combinations of spots, bars, and radiating lines.

Color provides a clue to more than a box turtle’s species. It can also help us determine the gender of that lurching, resolute reptile we stop to help cross the street.  If the eyes (irises) are bright orange or red, you’re holding a male; females have brown or light orange eyes. What if, in response to your good deed, the turtle has gone into hiding, making eye contact a moot point? Simply turn the creature over; females have a flat plastron, males are slightly concave. (Think about it. Birds do it, bees do it…).

The hinged plastron is what caused taxonomists to create a separate genus for North America’s box-top reptiles, and what allows the eastern and it’s relatives to retreat into a kind of biological fortress.  And for most of their history, this survival strategy worked quite well—against coyotes, raccoons, and skunks, that is.  Sadly, it doesn’t provide the same level of protection from every threat.

Box turtles are still relatively common throughout much of their range, but not even the most tightly closed shell can shield this species from the impacts of habitat loss and other interactions with Homo sapiens. These are slow moving, slow growing creatures with delayed sexual maturity and low reproduction rates, all of which puts them at risk. A female may produce hundreds of eggs during her lifetime, but less than a dozen offspring can be expected to survive to adulthood. It’s hard to even begin to estimate how many turtles are hit attempting to cross roads every year, and there are plenty of other hazard against which withdrawing into your shell is of little use—trains, lawn mowers, tractors, and bulldozers, to name but a few. Then there’s the capture of turtles for the pet trade. In many states, this practice is completely unregulated, with devastating impacts on wild populations.

Even so, there are times when coming out of your shell is the better choice. Especially for humans. Solitary confinement is used as a punishment because, unlike turtles we are social mammals. We need companionship, conversation, to touch and be touched. Hard to get any of those needs met when you retreat to your shell.

Unless, of course, you invite someone to join you there. 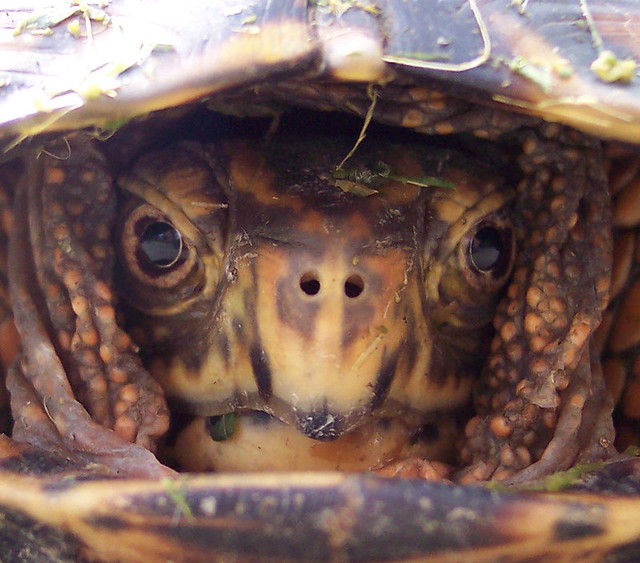