Kindergarteners swarmed around the khaki-clad naturalist, squealing with excitement, shouting out questions and jockeying for a better view. The adult volunteers on this field trip were a tougher audience.

“I’m glad they’re having fun but I don’t see why anyone should care about some bug,” one 30-something mom confided to another, adding, “What good is it, anyway?”

I overheard this question while visiting a nearby urban nature center but it’s just one variation on a theme I’ve heard throughout my life and career… a theme that opens the door to fascinating explorations of the ways human beings assign instrumental and intrinsic value to creatures great and small.  And I do so love engaging philosophical conversations.

My first, unfiltered instinct, however, is to hurl the question back at them like a boomerang: “What good are YOU?”

I catch myself—usually—before the words escape, gently reminding my outraged inner eco-warrior that choosing honey over vinegar improves our chances of winning both the battle and the war.

To successfully implement a honey-offensive, it helps to have an arsenal of sweet scientific research think-bombs at the ready. This is an arms race and, naturally, I’m always on the lookout for a chance to acquire the hottest new technology so I can blast misconceptions and prejudices to smithereens.

Imagine, if you will, my greedy glee when, last week, I stumbled on an amazing new trove of ammunition from a most unlikely source.

Is there a creature  more likely to inspire the value question than a cicada? (In those parts of the world where insects are not a significant source of protein in the human diet, that is.) How’s this for a life cycle? Hatch from your egg, drop out of your natal tree, dig in and spend 1—17 years (depending on your species) hanging out underground sipping root juice and metamorphosing through various awkward stages of puberty. Finally emerge from the soil, climb out of your skin one last time. Rest until your shiny new wings harden then hook up with a member of the opposite sex and get busy… or not. Depends on how long you can avoid being eaten by a squirrel, a bird, a dog or cat, a fish… and rest assured, you will be eaten at some point during those 1—6 weeks of halcyon summer days preceding your demise.  Unless you are transformed into a zombie slave by a cicada killer wasp (Exeirus lateritius) in need of a surrogate mother for its offspring, in which case you’ll still be eaten but it will take longer for you to die.

One could argue that if the nihilists are searching for a mascot, they need look no further than one of the 2,500   Cicadidae clan member species. Still, until the pointlessness of existence becomes a dominant meme in human culture even a potential poster-child gig is unlikely to satisfy a determined anthropocentrist who insists on asking, “What good is it? You know… for people?”

Turns out, Australia’s clanger cicada (Psaltoda claripennis, aka clear wing cicada) may end up doing quite a lot of good for people. Unintentionally, of course; insects aren’t known for their benevolence. But according to a recently published Biophysical Journal article cicadas may be an accidental ally in our battle against bacteria. 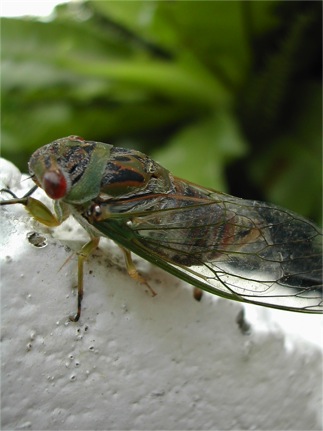 Chemical warfare is common in the insect world. Humans readily adopt the same strategy against both microscopic and macroscopic opponents (although, in most circles it’s considered verboten in human-versus-human conflicts). Funny thing about man-made poisons—they tend to deliver short-term success followed by long-term environmental headaches, especially when used against enemies with high reproduction rates. Insects and bacteria, for example. As a former defense secretary once said, though, you go to war with the army you have. We have chemicals. Lots of chemicals.

How refreshing, then, that according to a team of researchers from Australia and Spain, evolution has armed the clanger cicada with a vaguely medieval yet elegantly simple physical defense against infection.

Enough to make a punk rocker proud (and Vlad the Impaler SO  jealous). You see, clanger wings are covered in an array of sharply pointed nanopillars. When a hapless bacterium settles on this surface, it stretches and sags into the crevices between the spikes, like Jell-O on a bed of nails, until the cell membranes are shredded and the microbe is incapable of reproducing.

Scientists have already begun to investigate the potential of synthetic cicada-inspired materials. Think of it—in the not-too-distant future countertops, doorknobs, bus straps and subway poles, sinks and commodes, railings, surgical instruments and even money could be covered with a passive bacteria-killing surface that makes the ubiquitous hand-sanitizers obsolete!

Now, how could an invention like that possibly do a young mother any good?