No Particular Place to Go 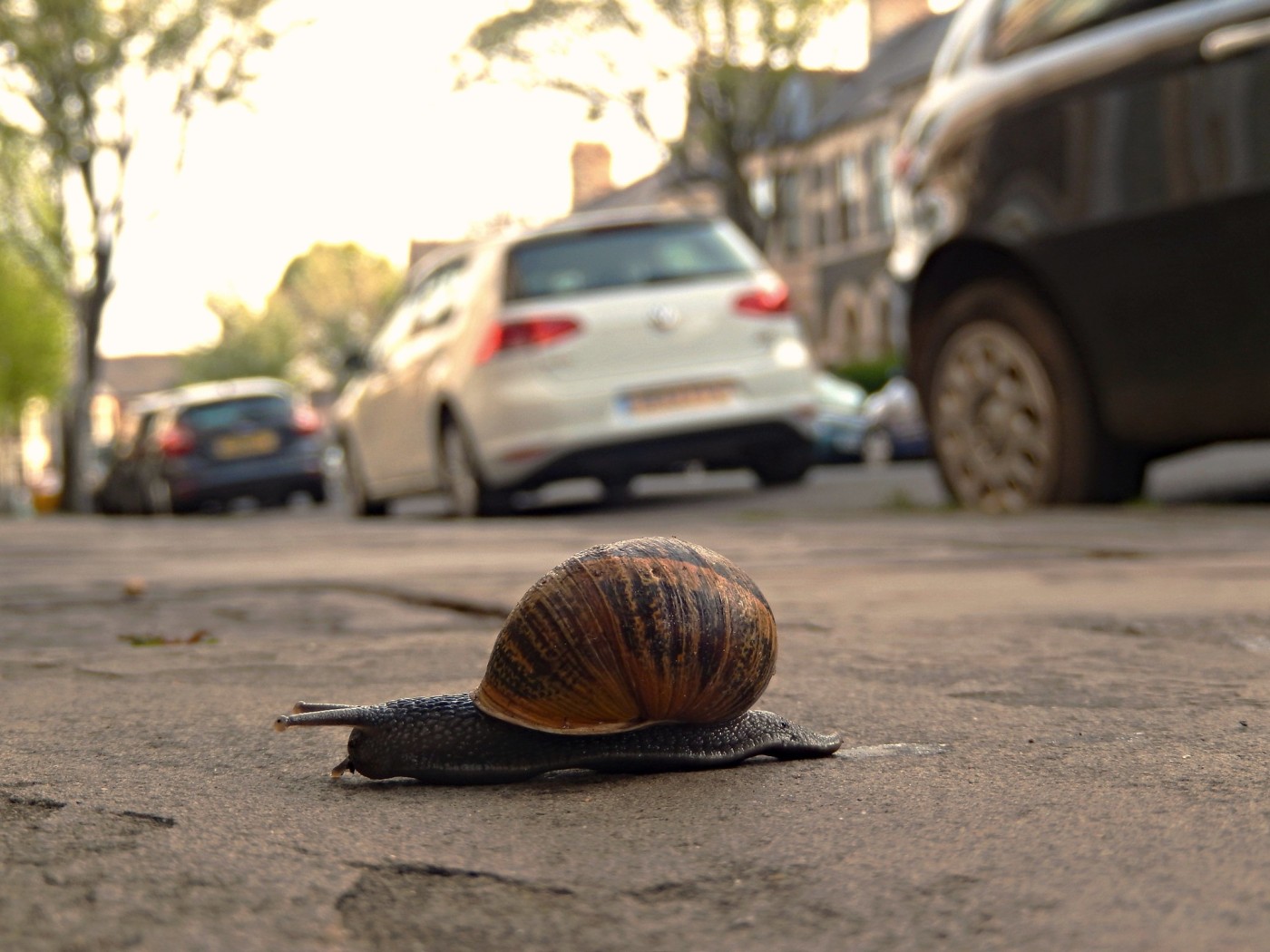 Stepping onto the sidewalk for a pre-breakfast stroll with Dash, my terrier, I saw a shimmering calligraphy on the concrete up ahead. Now, I live in a large apartment community in a college town so I’ve learned that it’s important to watch where you step on Monday mornings, but this didn’t look like party residue. Since it resembled writing, I thought for a moment it might be chalk—a message decipherable only by Greeks (the collegiate variety)—but that wouldn’t explain the silvery quality of the text.

Finally, I drew close enough to solve the mystery. It wasn’t writing at all. The weather had finally turned warm enough—temporarily, at least—for the local gastropod to take a stroll along a slime trail.

Can you stroll when you have no legs and only one foot?

Stroll, stride, saunter… call it what you will. Snails get from point A to point B by gliding along a secreted track of mucus that hardens into a kind of Slip ‘n Slide® when exposed to air. The animals ride waves created by a band of muscles in the foot that travel from the tail to the head, surfing along the slime, over the roadway, through the woods, and up the walls of grandmother’s house. 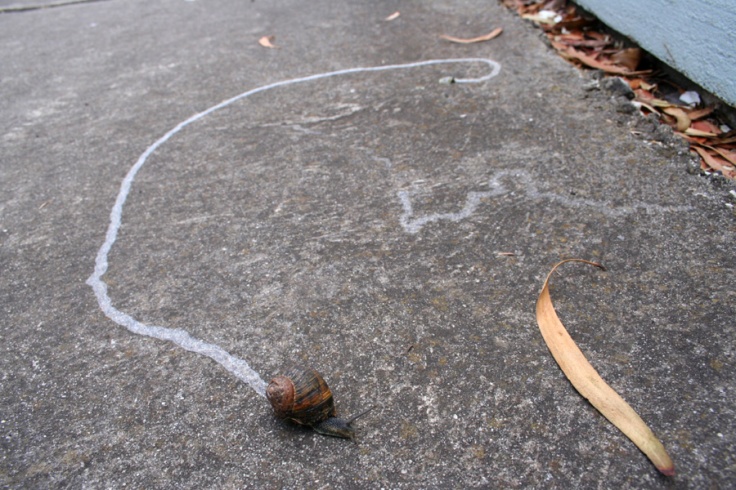 Progress appears painfully slow to bipeds and quadrupeds, but the meandering trails suggest snail excursions are all about the journey, not the destination. You have to admit, they never rush—unlike many of their harried human neighbors.

Of course, it’s a smaller world for some. An average speed of 0.03 mph must be fast enough for a garden snail to get where s/he needs to go (snails are hermaphroditic, meaning they have both male and female sex organs, so s/he is particularly apt here).

Before you dismiss the lowly snail as too pedestrian to warrant admiration, you should know that the National Science Foundation supported a research collaboration between the University of California at San Diego (USA) and Stanford University (USA) to better understand the locomotion of snails and slugs, their shell-less cousins. The goal was to create robots that mimic snails, propelling themselves up and down walls, along ceilings, and across other challenging surfaces.

An examination of the mucus trail has proven fascinating as well. When common periwinkle snails are traveling along a vertical surface, the secretions have more adhesive qualities than when the animal is moving along a horizontal surface; the chemical structure of the mucus changes depending on the demands of the route.

But wait—there’s more! A study by researchers at the University of Sunderland (UK) found that snails conserve energy by reusing slime trails. They will retrace their step to return to a previous resting site—a much safer strategy than hoping to stumble on an appropriate new location in time to avoid the dehydrating rays of the sun. Snails will also follow the trails of their cohorts to find dinner and a date. Essentially, they’re playing follow-the-leader.

From where I sit, it looks as though a snail’s life is all fun and games… and what wouldn’t I give to see a group of gastropods do the Hokey-Pokey?

4 thoughts on “No Particular Place to Go”