King of the Road

There’s a wonderful word—one of my favorites— to describe creatures that are active at dawn and dusk. Crepuscular. There are plenty of them, so the great outdoors gets lively when the light is low, making dusk and dawn excellent times to see wildlife.

That is, unless you’re in a car.

Challenging light conditions can conceal an animal near the road and reduce a driver’s response time when something darts out. While driving at twilight, it’s important to scan the shoulders for movement or for the telltale shine of eyes reflecting headlights. Vehicles are a constant threat to wildlife and my time at a rehabilitation center provided more than enough evidence of that. I should know better. But, lost in thought on my way to the mall, I didn’t see the striped skunk until he had sauntered into the middle of my lane.

It wasn’t a major thoroughfare so I had the road to myself, and I wasn’t going very fast. I had time to cede the right of way. Good thing, because I knew better than to expect this black-and-white tough guy to blink. In fact, he stopped and turned to stare down my Subaru.

Ever since he was a kit, the rest of the world has maintained a respectful distance—why wouldn’t he expect an automobile to follow suit?

If there’s enough time, skunks will usually give those who cross their path fair warning. According to mephitologist (skunk scientist) Jerry Dragoo of the University of New Mexico, a whole series of threat behaviors may occur before Pepe le Pew resorts to using the big gun. Striped skunks will stomp both front feet, charge forward a few steps and then stomp, or back up while dragging their front feet before spraying the object of their wrath. They can discharge their weapon while looking you in the eye, using an over-the-shoulder stance or even a handstand.

I’ve heard stories in which a skunk was taking his or her time crossing the road, or was dining on some previously flattened wildlife, and clearly saw the car coming. Drivers have reported observing the kind of threat posturing described by Dr. Dragoo, although they may not recognize it as such. As their vehicle gets closer and closer, they wonder why the animal just stands there. Surely it will scurry off the road… any second now!

Instead, the skunk holds its ground, takes aim, and fires… and in the process becomes another scavenger’s meal.  Gone, but not forgotten.  Not until the fragrance fades, at least.

I’ve got good skunk karma, I guess. Either that, or this particular stinker was feeling mellow. Thirty seconds of holding my breath… then he decided to continue on his way and I escaped getting doused. 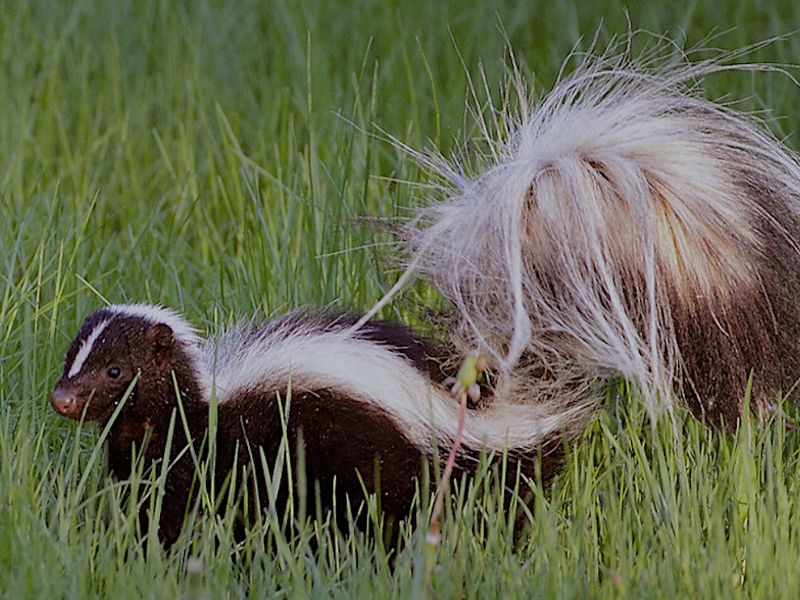 My luck ran out a few minutes later at the mall, though. Still thinking about my skunk encounter, I never saw that perfume saleswoman stamp her feet.

One thought on “King of the Road”