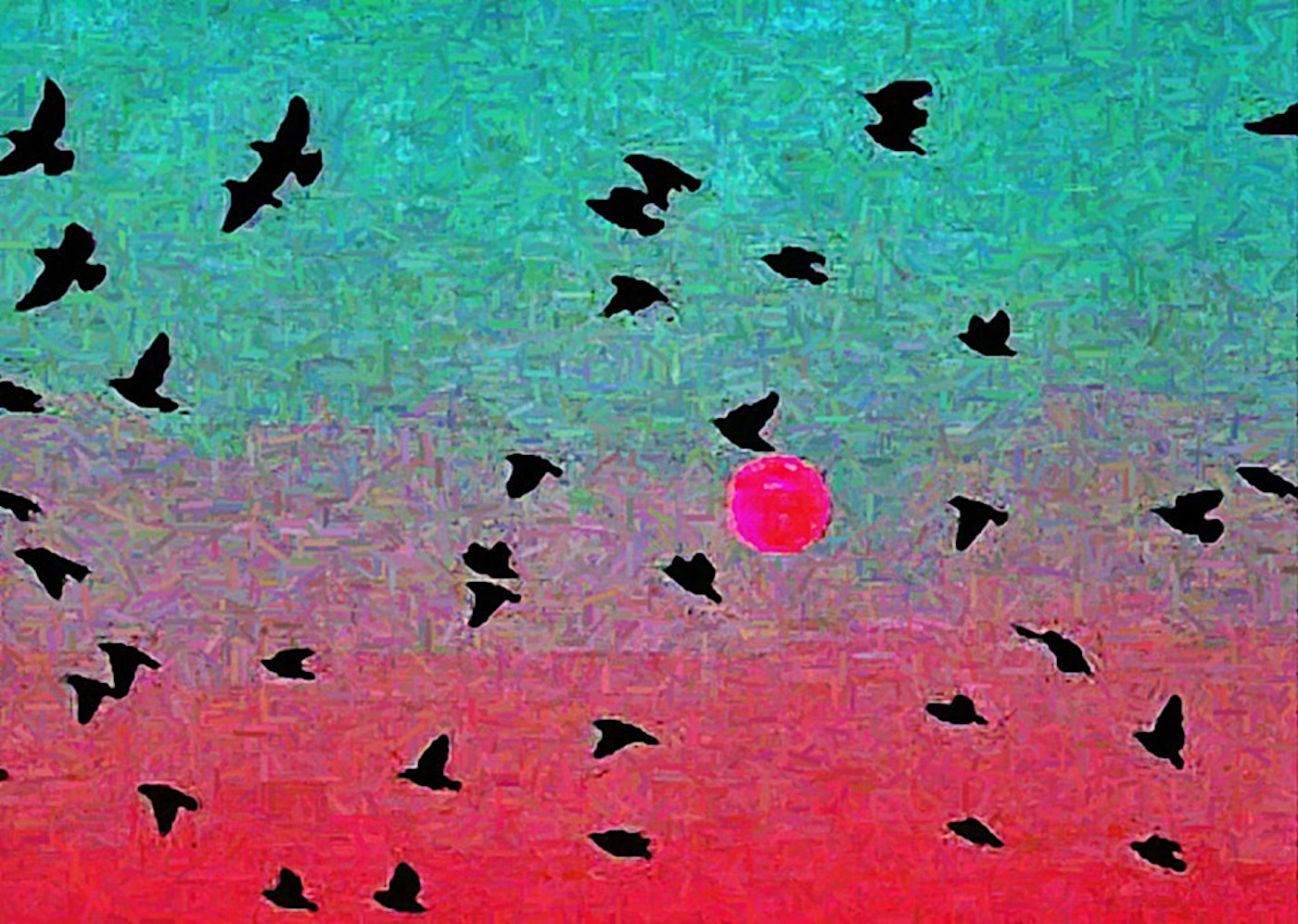 One for sorrow, Two for joy,
Three for a girl, Four for a boy.
Five for silver, Six for gold,
Seven for a secret, Never to be told.
Eight for a wish, Nine for a kiss,
Ten for a bird, You must not miss.*

One… I’ll concede to the prognosticating poet who wrote this traditional nursery rhyme that it’s possible someone could overlook a band of 10 large jet-black birds. Not so easy, though, to ignore the crowd of American crows (Corvus brachyrhynchos) congregating daily in my neighborhood from from November through February. Anyone with eyes to see and ears to hear can’t help but take note of their arrival each evening and dispersal each morning.

Two… American crows are a highly social species, even though they don’t spend much time on Facebook or Instagram. They prefer analog tweets to digital, and in-person get-togethers to virtual meetups.

Three… That said, their gregarious, garrulous gatherings are conspicuous because they’re a seasonal phenomenon, rather than something that happens without fail throughout the year. American crows divide each trip around the sun into family-time (spring and summer) and flock-time (fall and winter).

Four… From April through August the focus is on child-rearing. A nest of twigs lined with grasses, feathers, and fur will cradle 3-9 pale aquamarine eggs freckled with taupe. After 16-18 days of incubation the nestlings hatch, wobbly-headed and naked but for a few scattered tufts of fluff.  The blue-eyed youngsters fledge 20-40 days later but continue to receive attentive parental support and supervision way past the point when a less invested caretaker would consider the chick a child.

Five… Long-term monogamy is the rule for this crew, and breeding pairs form stable, close-knit kin groups. Relatively slow to grow up, American crows don’t reach sexual maturity until about 2 years of age, and most don’t leave home, choose a life partner, and start their own family until they’re 4 or 5.

Six… The entire multi-generational household pitches in to raise up the newest additions to the clan. This gives the older sibs a chance to hone their parenting skills while lightening the load for Mom and Dad.  So, you see, instead of writing a mnemonic about a set of 10 ebony avians, our 16th century bard (or 17th, or 18th… no one knows for sure) could have more succinctly and accurately stated, “I spy a family.” 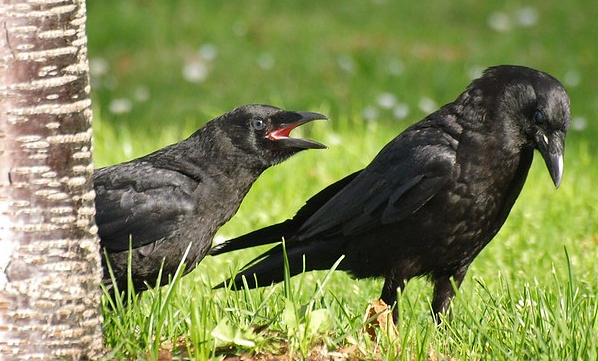 Seven… Once the kids are out of the nest and have learned to fly there’s time to step out of one’s own gene pool and rub wings with the broader Corvid community. During daylight hours, family groups will connect and mingle at local eateries — rural populations glean for downed fruit in orchards and leftover grains in agricultural fields, as well as for rodents and insects who are there with the same goal in mind;  crows who live in cities and suburbs take advantage of landfills, restaurant dumpsters, and other anthropogenic food resources.

Eight… When the winter sun descends in late afternoon, clouds of wings form and darken the sky.  Hitching a ride on the wind, crows arrive from foraging sites as far as 50 miles away, converging at time-honored locations that, in some cases, were frequented by their parents, and their parents’ parents, and generations of feathered ancestors before them. 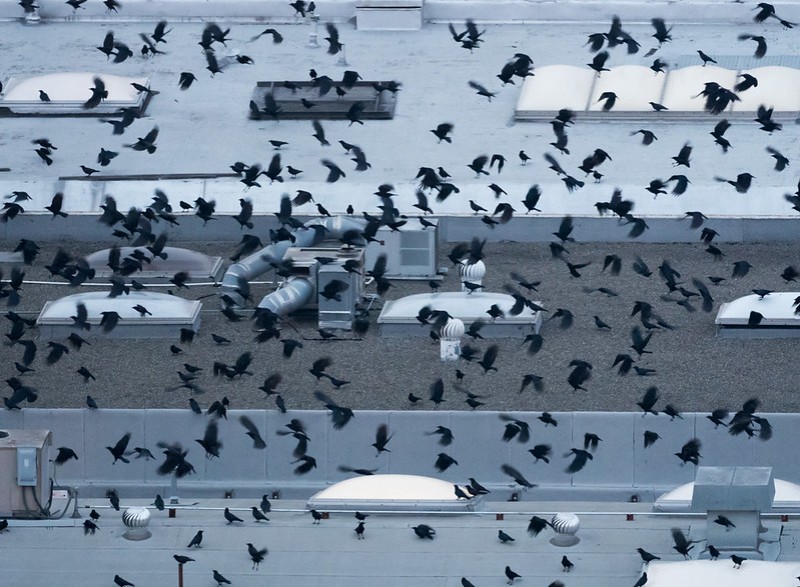 Nine… These historic communal roosting sites are where the limitations of a quaint folk rhyme become abundantly clear… because we’re no longer talking about a large family, or even several large families. These nightly reunions may consist of 10×10 crows, or 10x10x10, or so many inky birds that exponents (e.g., 104, 105, or even 106) are warranted when attempting to estimate the crowd.

Ten… Based on observational data, crows are quite skilled at communicating complex information with one another, such as the location of food resources or predators. However, crows are not as good at communicating with people (or maybe people are not so great at understanding crows). As such, we can’t know for sure why these birds rendezvous en masse each year when the days grow short. Many hypotheses have been offered, including: safety in numbers; the benefits of shared body heat; the ability to reconnect with dispersed extended family; opportunities for younger members of the community to meet a future mate; the aforementioned intel sharing; or perhaps all of the above. We also can’t discount the fact that social animals enjoy socializing and, as people know full well, winter is a great season to spend time with friends and family. 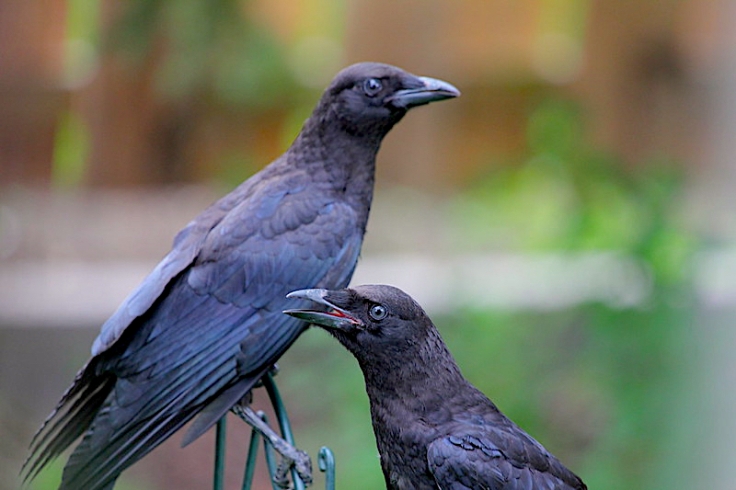 Ten Plus One… FYI, the scribe who set an accounting of crows to verse, all those many, many years, ago might not have been the only one keeping tabs.  Crows can count. They do so using the nidopallium caudolaterale, a structure located near the front of a bird’s brain that’s comparable to, but significantly different from, the neocortex used by primates and other tallying mammals. Oh, and they also make and use tools, understand analogies, and beat human children in intelligence tests.

I’ll bet you weren’t counting on that!

*A modern version of the traditional children’s nursery rhyme, “One for Sorrow,”  about common magpies, a member of the Corvid Family cousin to the American crow.