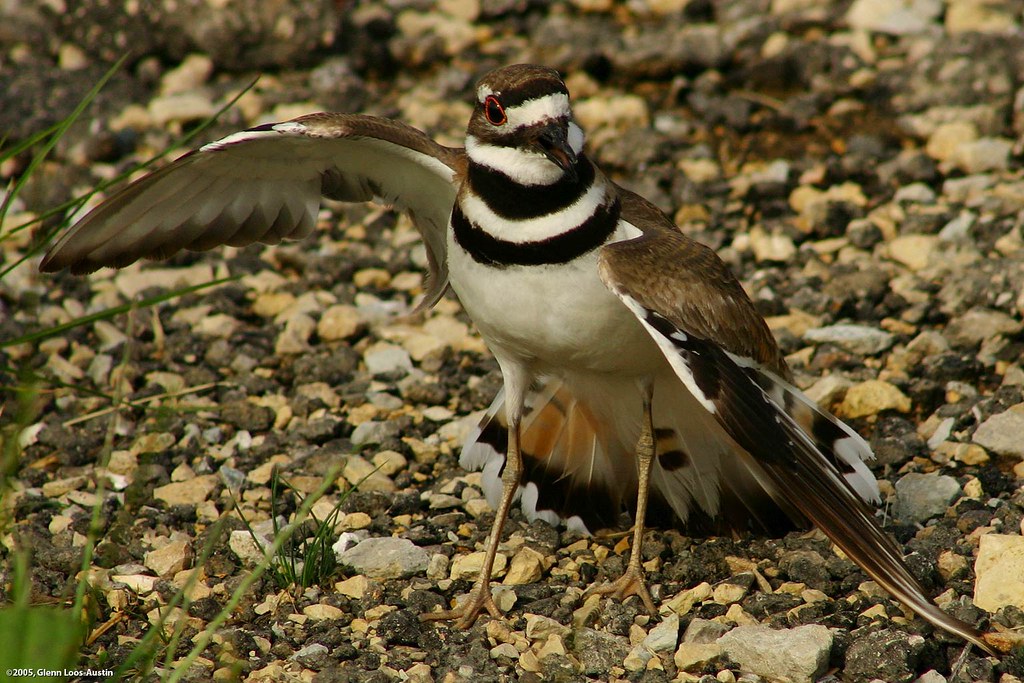 All the world’s a stage, and all the men and women merely players. An astute observation by the Bard, but a bit misleading. Had Will but ventured beyond the Globe Theater’s door he may have realized that humans aren’t the only animals who have acting chops.

I’m not talking about critters who pose in front of a movie or television camera while their personal trainer feeds them lines. And treats. Mercenaries all, and nothing but. One need search no further than yonder killdeer (Charadrius vociferous) to see an authentic actor working tirelessly at his or her craft. Never for money, always for love.

Not love of acting. It’s familial love that drives a bird to risk life, limb, and bad reviews. At least, that’s what we would call it were it displayed by a human parent. Scientists are wary of applying emotional terms to the behavior of anyone other than Homo sapiens, though, and those who are careless enough to try should expect to be on the receiving end of a harsh accusation from their colleagues: Anthropomorphism! The attribution of human characteristics and behavior to non-humans, and the biological community’s version of a Scarlet Letter. As a member of that cohort, rather than open myself up to criticism I’ll simply tell the story and you can decide for yourself.

First let’s set the stage. It could be a beach, mudflat, or sandbar—killdeer are related to shorebirds, after all.  But you’ll also find touring companies far from an oceanfront theater; at a parking lot, a flat gravel rooftop, soccer field, or golf course near you.

The entire cast—male and female alike—wears the same easily recognizable costume: bronze back, wings, and crown; not one but two black cravats at the throat; and a white belly, neck, and forehead. Orange eyeliner completes the look.  At 8–11” tall, the killdeer is lanky compared to other plovers. You might think height, combined with a dramatic ensemble, would make for a powerful stage presence. Oddly enough, the players can be rather difficult to spot against the usual green or sandy-brown scenery.

Act I: The curtain opens on our newly paired hero and heroine searching for the perfect place to build a home and raise a family. No McMansion for this down-to-earth couple—the acting life is a squatter’s life. Find a bit of open space with a decent view, move in, and call it your own. Carve a shallow depression in the grass or gravel with your feet, put all your speckled buff-colored eggs (4–6) in one basket… and then watch that basket!

Act II:  It’s 3–4 weeks later and the next generation of killdeer Barrymores or Redgraves burst onto the scene. Wearing a velvety version of their parents apparel, these youngsters are precocial in the truest sense of the word—they can’t fly but they’re bright eyed and ready to hit the boards running as soon as their down is dry.  It will take 20–30 days before they are able to strike out on their own… and it will be a perilous month indeed!

Act III:  Enter the villain… bwa ha ha ha! [This is where you, as an audience member, should feel free to boo and hiss].  S/he may appear as a seagull, a falcon, a fox, an ATV, or a beachcomber. Further from shore the scoundrel might be dressed as a crow, a coyote, a cow, a dog or cat, a child, or a car.

Gasp! Who will save the children?!

No matter the size or form, or whether the threat is a tooth-filled maw, a flip-flop clad foot, or a steel-belted Firestone, without a moment’s hesitation or any consideration of personal safety, our fearless, feathered leading man or lady springs into action. Hurray!

Okay… that’s not technically accurate, but “flops into action” doesn’t have quite the same dramatic punch, now does it?

Here’s what really happens. When something threatens the eggs or hatchlings, the adult birds will act as if suddenly stricken with some crippling illness or injury. Barely able to walk and dragging one or both wings, the parent will attempt to lead the evil-doer away from the kiddos.  Choose to follow and there’ll be some true scenery chewing. The real or perceived predator will be allowed to get closer… closer… nearly close enough to touch… but calling on one last drop of adrenaline, the bird flutters… stumbles…  lurches…  just… a bit… further…

Once the offspring are safe, a miraculous cure takes place instantaneously! Wings unfurl, there’s a flourish of feathers, and our hero/heroine is circling high above a startled stalker. The crowd goes WILD!!

What motivates such a performance—love, instinct, or brain chemistry? The critics are still out on this one.